The financial status of Newport Beach and its biggest challenge, the unfunded pension liability, were on the table for discussion during a community meeting last weekend.

“To me, this is the most persistent and significant gloom that hangs over most California cities, including our own,” said City Manager Dave Kiff during the annual City Council planning session held Saturday at Marina Park.

But there are challenges, Kiff added. At the top of that list is the unfunded pension liability.

According to Investopedia, an unfunded pension is an employer managed retirement plan that uses the employer’s current income to fund pension payments as they become necessary. This is in contrast to an advance funded pension plan where an employer sets aside funds systematically and in advance to cover any pension plan expenses such as payment to retirees and their beneficiaries. 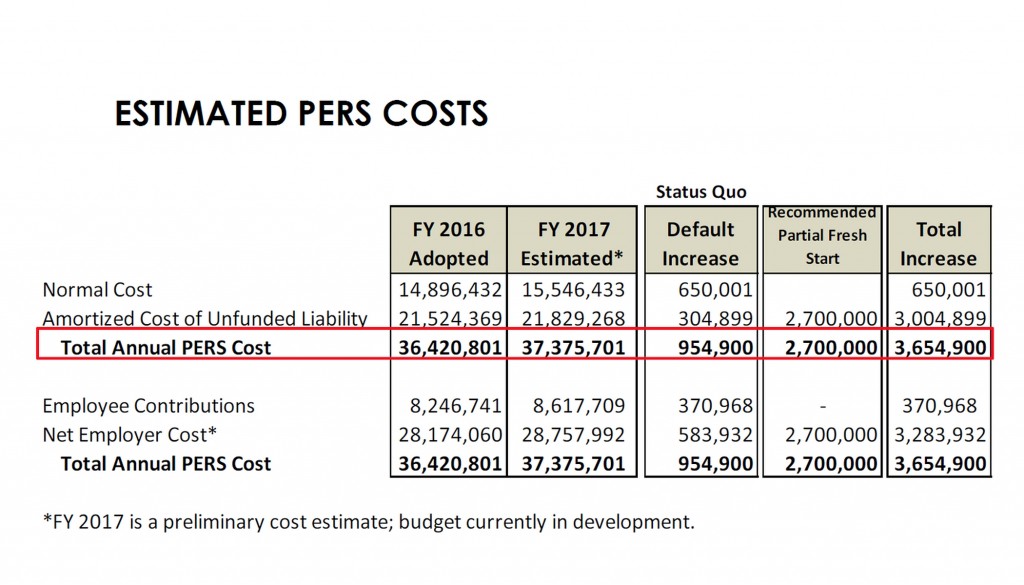 The total annual California Public Employees’ Retirement System (also known as CalPERS) cost to the city for the 2016 fiscal year came in at just over $36 million. The 2017 estimate exceeds $37.3 million, with employees contributing about $8.6 million of that, Matusiewicz explained, leaving about $28.7 million for the city’s portion.

Cities across the state are facing this issue and trying to find a solution. It’s a very challenging problem, Kiff said.

Unfunded pensions are one of the top issues that keep her awake at night, said Mayor Diane Dixon.

It’s clearly an important issue, Dixon noted, “I want (the city) to be planful and strategic.”

Newport is making progress on it, Kiff said. In order to more efficiently pay it down, city staff has come up with a payment plan called “Fresh Start.” 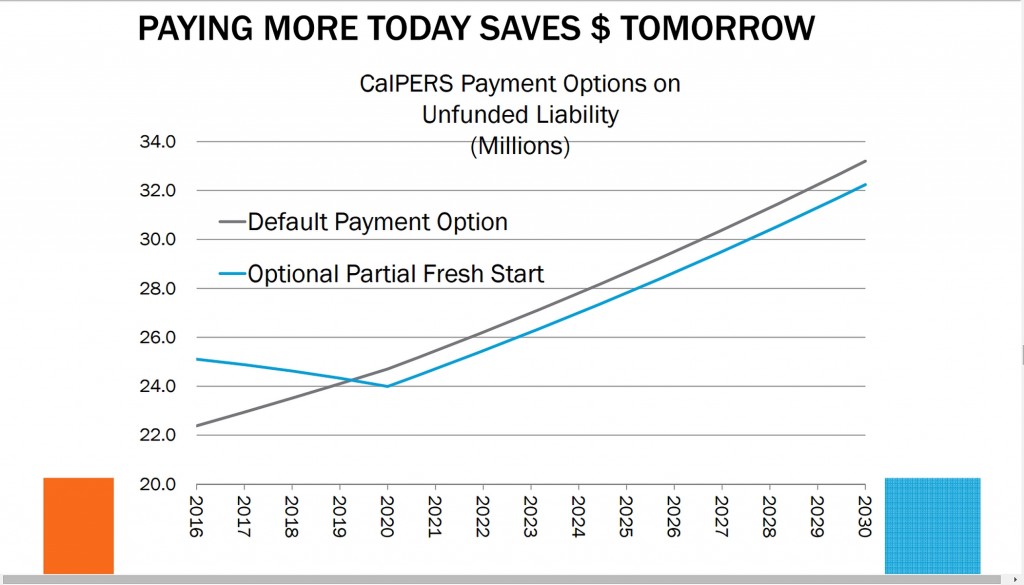 The default option plan from PERS would see the city’s payment increase by about $1 million next year. It would slowly increase over the years. The PERS payment plan is biased toward cities that can’t afford to make drastic increases in their payment, Matusiewicz said, but Newport Beach doesn’t fall into that category.

The staff recommendation is to increase the payment to $2.7 million to “get a little bit ahead of it,” Matusiewicz said. This Fresh Start plan would help the city pay less in the long run and “reap significant savings down the road,” he noted.

In the Fresh Start plan, the city would pay approximately $6 million more in the first few years than it would through the PERS default plan, then roughly $1 million less for about the next 16 years.

“We want to jump to what the payment should be, especially while revenues are good, and then save over the long run,” Matusiewicz said.

The committee will analyze the Fresh Start plan and determine whether or not it’s the best plan and makes sense for the city, Dixon said. This may offer the city more control over the funds they send to PERS and over the city’s unfunded liability, she noted.

It definitely needs to be seriously considered, she continued. Staff might also consider a variation on the Fresh Start plan via a trust separate from CalPERS, Dixon suggested.

The city has also been taking other measures to mitigate the pension liabilities, including reducing the number of full-time staff and having a lower benefit tier for employees that transfer into the city. Also, any new hire goes into the pension reform tier, or PEPRA tier, which is a stable and less generous tier with an older retirement age. Newport Beach currently has many of those type of hires in the city, but it takes 20 to 25 years to see a positive impact from that, Kiff explained.

“No one is being brought into the city in the classic tier, the most generous tier,” Kiff said.

Employees are contributing a greater share of the pension cost, about $8.3 million in the 2015-16 fiscal year.

“The employees are also paying much more of the check that goes to Sacramento now,” Kiff said.

Between nine to 14 percent is deducted from each of the employees’ paychecks.

According to the 2016 fiscal year numbers, the employee pays more than half of the share of their own pension costs. The challenge comes when the total unfunded liability cost is calculated in and the employee pays only 22.7 percent and the city fills in the other 77.3 percent. Although, that amount is already higher than most other California cities and it’s steadily increasing.

Newport Beach is a few years ahead of the curve on that, Kiff said.

While increasing the employees’ share helps solve the pension problem, this makes it hard to recruit and retain employees, Kiff noted.

“No one else is asking employees to take as big of a deduction as we are,” he said, so they jump to nearby cities where the percentage paid by the employee is even less.

Another hurdle is that investment returns in 2014-15 were 2.4 percent, down from 18.4 the previous fiscal year. PERS anticipates that it’s about 7.5 percent each year, so the 2.4 percent fell “well short” of that target, Kiff said.

“The close of the most recent fiscal year doesn’t look any better,” for investment earnings, which translates into higher rates, Kiff explained. Higher rates that the city must pay to PERS to keep up with their obligations.

It is a very challenging moving target, he said.

“The ground shifts constantly and we’re going to be faced now, because of the current economic situation and the reduced returns…We have to consider accelerating that ‘fresh start’ or some other option,” Dixon said. “They keep moving the goal post.”

The meeting also covered current and future capital improvement projects and the mayor’s action plan for the year.