In February 2019 I left my old hometown of Newport Beach and became a traveling nomad.

I started in Spain, followed by Italy, Croatia, Eastern Europe, and then Asia. A wedding in March 2020 brought me back to the US and a side trip to Mexico that same month turned into a 15-month COVID confinement.

Since I had no home base in the U.S. anymore, the small fishing village of Puerto Morelos, just south of Cancun, became my new refuge from the pandemic.

Finally in June of this year the borders opened, and since I was so close to Central and South America, I thought “Why not?”

I had little interest in tourist spots like Buenos Aires or Rio de Janeiro, but I found a new country that has replaced my old number one as the most magnificent place I have ever visited. And it was a country that I knew little about and was not overly excited to go to. So what country impressed me? Ecuador.

The views in my mind’s eye that drew me to Ecuador were two things: seeing the Andes mountains shrouded by clouds and standing on the border between the Northern and Southern Hemispheres in the city of Quito. I have accomplished both those things and in doing so, was totally unprepared for how impressive Ecuador is.

I am blown away by nature and geological and topographic changes. Until just before I got here, I did not know that the capital city of Quito is over 9,000 feet above sea level. My naïve thinking believed that Ecuador in summer, and being located on the equator, would be a hot experience.

At that elevation seasons do not matter that much, and being equidistant between both hemispheres has little effect on temperatures and hours of sunlight. It truly is a country that is “balanced” between weather extremes.

Flying into the airport was magical as I saw the mountains I envisioned and so many shades of green I could not even describe. Deep crevices, high peaks, all mingling together within a few hundred feet.

I learned there are 47 active volcanoes in the country and the “Ring of Fire,” the boundary of the tectonic plates, is along the western border. 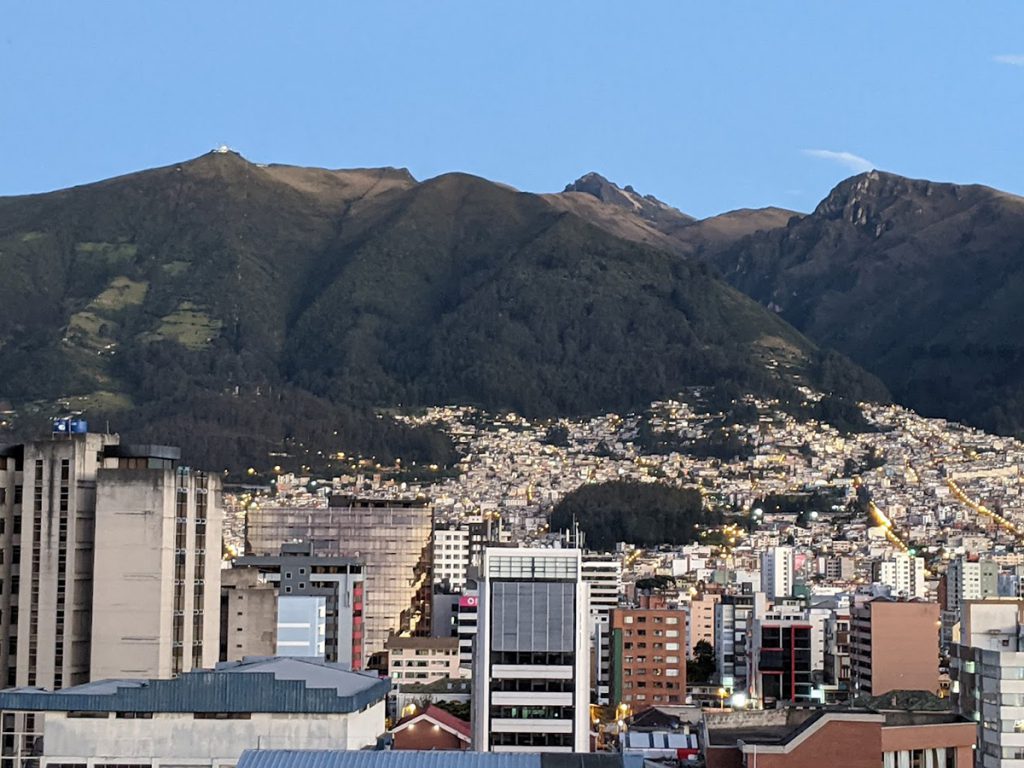 I have ridden motorcycles in Croatia and in Romania, and now I have done the same in Ecuador. Until now, Romania was at the top of my “best roads” and “most fun” list, but it may be knocked off by my latest journey through beautiful Ecuador.

I recently completed a 573 km (356 mile) motorcycling trip over three days and saw some amazing things and enjoyed some of the grandest roads I have ever ridden.

But there was a health hazard: my neck got sore from turning one direction to the next as every curve exposed more unique beauty. My jaw hurt after so many jaw-dropping vistas, but it was the never-ending grin on my face that brought sublime pleasure as I realized I was riding through some amazing country, full of history and some of the most geologically active terrain I have ridden through in my life. The smile was with me the whole time.

We left Quito on day one and within an hour were out of the city and traffic. Not long after, the great (and still active) Cotopaxi volcano showed up on my left, and we had to stop for shots.

Often obscured by clouds, I find that mornings are usually best for clear viewing, and the almost 20,000-foot mountain was as spectacular close up as it was from Quito.

Our route out was a biker’s dream as the “twisties” kept coming and we handled them all with finesse. One of the great things about bikes is that signs like “road closed” do not always deter us. We asked some locals if the road was really closed, and they told us there was road work being done and we should give it a shot. 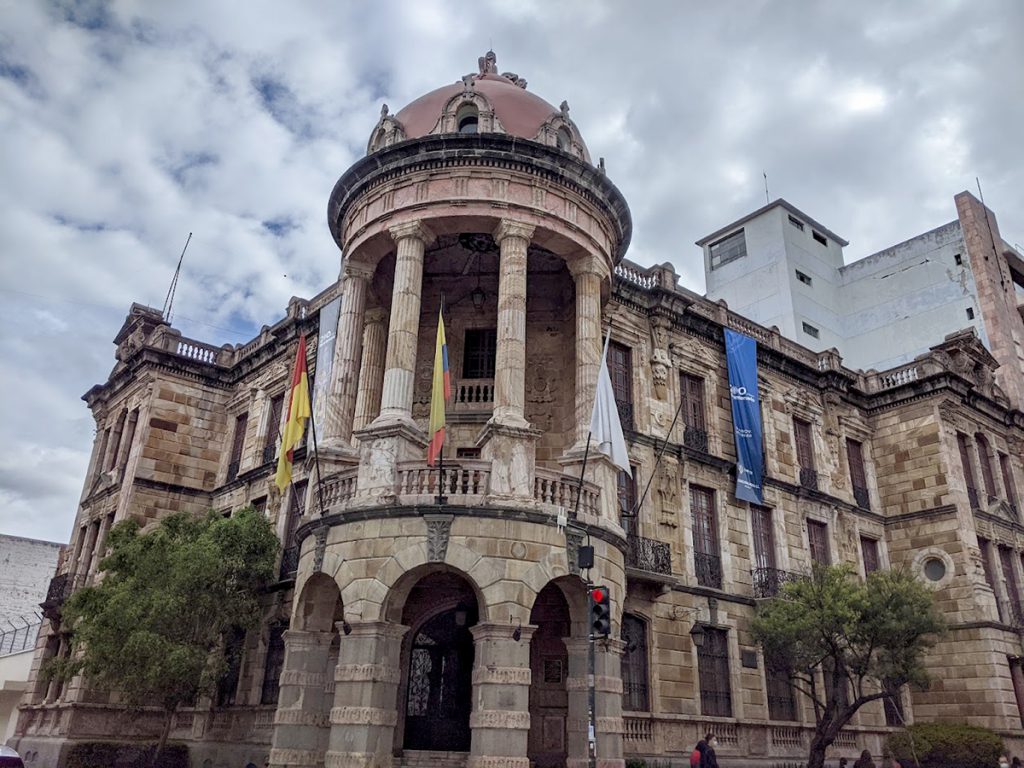 Ecuador is a majestic country with grandiose mountains and carved out valleys, and with that you get erosion and road damage. We had to slowly go through about 50 yards of narrow road full of rubble and saw the problem: half the road was gone down the hill, but when we emerged the road opened up to a beautifully paved highway and for an hour it was one continual grin which plastered my face.

Food and lodging are very inexpensive and I had a mountain view of the 14,000-foot Pichincha peak for $12 per night. No, that is not a typo! A good breakfast, American or local style, is about $5.

I spent most of my time in Quito, but along with the other smaller towns on the bike trip I also went to one of the largest ex-pat communities in South America, the city of Cuenca. The eight-hour bus ride was tedious for the first five hours but spellbinding for the last three as we went through clouds and hills and valleys that are a photographer’s dream.

My friend I stayed with described the uniqueness of the country. Within a few hundred miles they have the ocean, valleys and two ranges of Andes mountains. Quito is the second highest elevation capital in the world and the north/south equatorial boundary is also.

The geek in me came out as I straddled the boundary and within 12 feet of either side the water whirled down the drain in opposite directions! 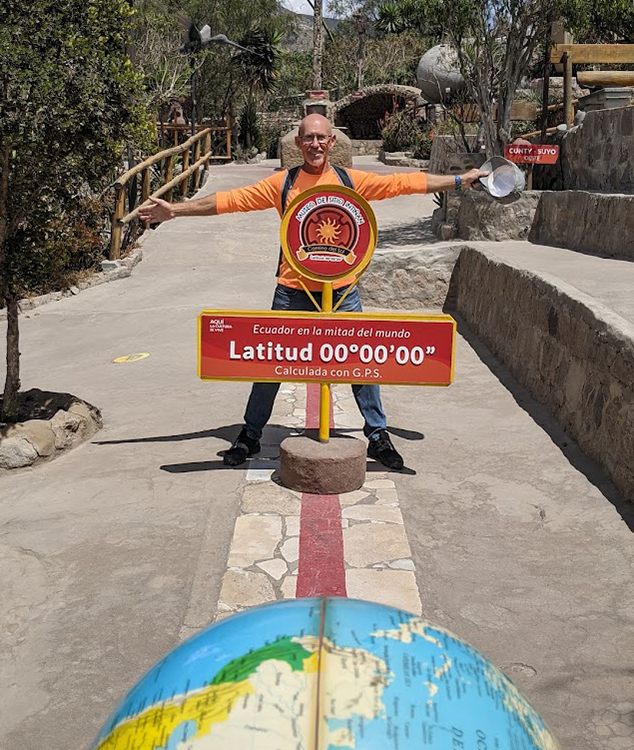 The country also has amazing history and monuments and cathedrals. Ecuador was the first country to free itself from Spain and they in turn helped other South American countries do the same. Had things turned out just a bit differently, there were efforts to make Columbia encompass almost all of the northern countries here, and the continent of South America might not even exist.

If any of this sounds interesting, please contact me as I will be coordinating cultural, motorcycling, and ecological trips into the country.

For more information on Norm Bour and his travels, visit https://travelyounger.com. Contact Norm at [email protected].