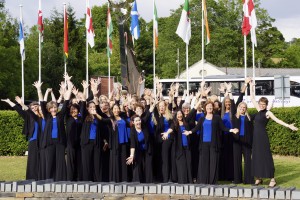 “Music-making is most enjoyable if it’s done at the highest possible level, but that level can’t be achieved without a spirit of joy, trust, and love among the performers,” she explained during a recent interview.

With a masters degree in conducting from University of California, Irvine, Rubenstein, who’s also the Director of Choral and Vocal Activities and Chair of the Music Department at Orange Coast College, has spent more than fifteen years leading the OC Women’s Chorus. It’s a labor of love that resulted in the respected amateur chorus being named a 2014 Outstanding Arts Organization by Arts Orange County.

Fresh from an exhilarating first-ever tour of England and Wales, where they delivered a prize-winning performance at the International Musical Eisteddfod (Festival) in Llangollen, Wales, Rubenstein reflected on her group’s artistic goals, its upcoming 18th season, and the auditions for new members (in all voice parts) being held this month.

“We’re looking for experienced singers with strong musicianship skills who are also great people!” she said, adding that the auditions are very “non-threatening.”

A diverse yet close-knit group of various ages, the OC Women’s Chorus rehearses on Tuesday evenings at Newport 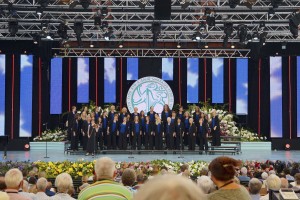 Harbor Lutheran Church, where they perform at least two concerts each season.

“The church has been wonderful to us over the years,” Rubenstein enthused.

There are usually three weekends of performances total per year, plus the possibility of extra gigs or tours. The group’s 2015-2016 season includes a holiday show of Conrad Susa’s “Carols and Lullabies,” and one of music by Leonard Bernstein with Bel Canto, the chamber ensemble of Men Alive: The Orange County Gay Men’s Chorus.

“The biggest, but also most enjoyable, challenge for me has always been finding creative ways to answer the question ‘What’s next?’” Rubenstein acknowledged. “Our goals and ambitions have evolved continuously, and as a women’s chorus, we can’t simply rely on performances of the great canonical masterworks to keep us inspired and our audiences engaged.”

“It’s all too easy to think of ‘classical music’ as museum pieces, as an art form that we reach into the past to access. It’s good to remind ourselves that it’s actually very much alive, and one of the most exciting ways to do that is to help create new choral works ourselves,” she continued, pointing out that the group has worked with many living composers over the years.

“We can’t ask Haydn or Bach how they wanted a certain phrase to sound, but we can do that when a composer comes to our rehearsal of his or her piece. Since women composers are still underrepresented in the literature, we try to commission women as often as possible, but we’re not exclusive!”

“We grew enormously as an ensemble from preparing our tour repertoire, and we grew as friends from traveling and living and dining together,” Rubenstein concluded, recalling the fun of camaraderie abroad in England and Wales.

“We saw breathtaking sights and met extraordinary people; we sang at castles and cathedrals; we learned words like “stonking” from our guides—and I think all of us came home wondering where our next adventure would take us and how soon we could leave!”

To schedule an audition, email [email protected] or call (949) 451-8590. Prospective singers are asked to have previous choral experience and music-reading ability. To learn more about the Orange County Women’s Chorus visit ocwomenschorus.org.