The Book Discussion Group at the Newport Beach Central Library is ready to kick off its new season with Pulitzer Prize-winning “Empire Falls” by Richard Russo. Everyone is welcome to join the discussion group, which will meet Wednesday Sept. 8, from 9:15-11 a.m.

In 2002 “Empire Falls” won the Pulitzer Prize for fiction and in 2005 the novel was adapted into a two part mini-series that aired on HBO.  The project, which earned a Golden Globe for Best Mini-Series in 2006, featured Paul Newman, Ed Harris and Helen Hunt.  The story is set in Maine in a fictional mill town called Empire Falls where the once booming economy has been hit hard with a steep economic downturn.

The first sentence of the book brings us into a local haunt where many of the characters we will meet are regulars; “THE EMPIRE GRILL was long and low-slung, with windows that ran its entire length, and since the building next door, a Rexall drugstore, had been condemned and razed, it was now possible to sit at the lunch counter and see straight down Empire Avenue all the way to the old textile mill and its adjacent shirt factory.”

The protagonist of the story, Miles Roby is the manager at The Empire Grill.  He, like all the locals we meet, has strong ties to Empire Falls. And, like the others in town, he has his share of challenges.

The Book Discussion Group format is informal and an open forum, led by Librarian Andrea Jason.  According to Jason, anywhere between 35 and 60 people typically attend.

All 11 books for the year (September through July) have recently been released, so polish up your library card, start reading, and share your passion with other book lovers on the second Wednesday of every month.

July:   “To the Lighthouse” Virginia Woolf

Book Discussion Group at the Newport Beach Central Library
2nd Wednesday of the month from 9:15-11:00am.

Participation is free.
Authors are not present. 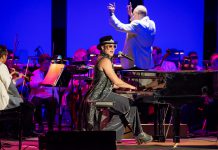