He’s been called “the funniest stand-up alive” by Vanity Fair. Anyone who has seen comedian Brian Regan perform would no doubt agree with that statement.

Regan packed Segerstrom Hall two years ago with fans eager to hear Regan’s slightly askew take on everyday life. He returns to Segerstrom Center for the Arts on Friday, April 5.

Regan manages to visit close to 100 cities a year, but in between his comedy touring he’s been busy with making TV appearances (he appeared on The Late Show with David Letterman 28 times) and acting in a new TV series called “Loudermilk” on The Audience Network. Loudermilk premiered to rave reviews in 2017, with Brian earning accolades in the role of “Mugsy,” a recovering addict who is estranged from his family.

In addition to seven one-hour comedy specials, including his latest Netflix hit “Brian Regan: Nunchucks And Flamethrowers,” Regan recently debuted a new Netflix series, “Stand Up And Away! With Brian Regan,” which is executive produced by another well-known comic, Jerry Seinfeld.

“I wanted an opportunity to create a show and reflect how I think as a comedian,” Regan told me during a recent phone conversation. “I think in short bursts, my standup bits are like little vignettes or plays, usually a situation like getting out of a cab or going to a doctor, or opening a refrigerator door, it’s a little situation. That’s how I think of things beyond standup, like sketches.” 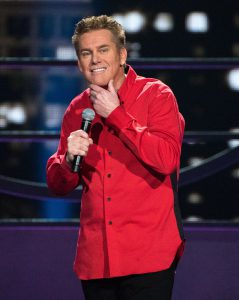 “Stand Up and Away!” is billed as “carefully curated standup,” which Regan said was a way to showcase his older standup material but in an interesting way.

“If I do the old stand-up routines and have those segue into brand new sketches, it would bs an interesting format,” he said. “I have gotten good feedback from it. And there could not be a higher honor than to have the king of comedy, Jerry Seinfeld, shepherd me through the process. I probably would not have that show if it was not for him, so I am honored that he is involved.”

Like Seinfeld, Regan is known as a “clean” comedian, which is a welcome departure from many modern comics who resort to risqué material.

“I enjoy the craft—I like to see how much mileage I can get without hitting certain worlds or subjects,” explained Regan. “I equate it to a photographer who likes to take black and white photos. It’s no less real or interesting, it’s just a different way to approach things.”

I wondered how Regan put his standup show together, and he told me he is always working on three things simultaneously.

“I am working on individual bits or jokes, working on five minute spots for Jimmy Fallon, and working on an hour of material for the next hour special,” he said. “All of those goals are happening simultaneously. I am fortunate to have those spots and specials to work towards, it gives me more motivation to move away from what I already have out there and replenish it with new stuff.”

“The five-minute things are the hardest to do,” he added. “I love doing an hour in front of my fans, you can rock and roll through it. A five-minute spot is never easy. It’s a lot of work. You come out in front of a bunch of people that don’t know who I am. I relate it to bowling. People know how to knock down the pins, but the hard part to me is setting the pins up. I walk out, and you have to set 10 pins up really quickly and then knock them down. That’s the hard part.”

Regan is guaranteed to “knock them down” at Segerstrom Center. He’s been quoted as stating that “every show is thrilling and when it works it’s a beautiful experience. When people are laughing, they feel good, and to be able to cause that feels tremendous.”

“It’s true,” said Regan. “There is something about a laugh, it’s a momentary reprieve from whatever is going on in your life. Laughter is such a beautiful thing. To be able to help someone with a laugh is a powerful feeling, and I am honored to be able to do it. I am the most fortunate person in the world to be able to make a living making people laugh.”