Those of you that recognize the name Jean Hastings Ardell, likely know her as both the columnist who writes the Indy’s own “Left of Center” political column, and a staunch local Democrat.

What you may not know about Ardell, however, is that she is an equally staunch fan of the game of baseball, and it is this love that would lead her on a decades long journey to ensure that those within the sound of her voice, or the reach of her pen, would recognize another name as well, that of Ila Jane Borders.

Ardell’s story began in New York City, where, as a young girl, she grew up playing baseball. While she describes the games as unorganized, and herself as devoid of any particular talent, those days playing pickup ball in the neighborhood would foster a love of the game that would stick with her long after the sun set, and the kids were called home.

Years later, and on the opposite coast, Ardell was working on a book about women’s contributions to the sport she loved, (made off the field, of course,) when she got wind of a young girl playing baseball for Southern California College, now known as Vanguard University.

Intrigued, Ardell attended a game, and discovered a whole new female contribution, as she watched the pitcher who was intrepidly breaking the gender barrier in baseball.

Ardell remembers a desire to follow that girl, Ila Borders, as far as baseball took her. Through covering her story, she struck up a relationship with Borders, which now, over two decades later, has finally culminated in the telling of Ila’s story, via the just released book the women co-authored, “Making My Pitch: A Woman’s Baseball Odyssey.” 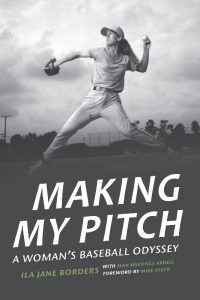 Ila’s story began in La Mirada, where, as a little girl, she eschewed playing softball in Bobby Sox, a league for young girls, to instead play baseball with the boys in Little League.

While we all remember Mo’ne Davis, the girl who pitched in the 2104 Little League World Series, I can assure you that in the 1980s, a girl playing baseball was unheard of.

Ila, however, did not stop there. She continued on, playing baseball for both her middle school and high school teams, both of which were otherwise all male, earning MVP honors along the way. With her sights always set on the big leagues, Ila went on to earn a scholarship to play men’s college baseball.

After college, Ila was picked up by the St. Paul Saints, of the Independent Northern League, making her the first woman since her pioneering Negro League sisters to play professional baseball.

Over her four-year career, she would play for the Saints, the Duluth-Superior Dukes, the Madison Black Wolf, and the Zion Pioneerzz. In 1998, while pitching for the Dukes, she became the first woman in the modern era to win a game at the professional level.

While Ila retired at 26, without ever making it to the big leagues, the path she blazed sends a strong message to young girls. In today’s climate, as girls and young women are realizing their potential as never before, she is proof that no barrier, or social more, is strong enough to stop a determined girl from achieving her goals.

In an interview with Ardell last week, I asked her what she has learned through her collaboration with Ila. After considering the question, she replied, “The lesson I learned from working with Ila on her story is ‘never give up.’ That was her mantra…The lesson I hope readers (of the book) carry with them is that we’re called to do more than just survive the hard times we encounter. Ila came through some tough situations, personally and on the field, and she not only survived them, but used them to be of service and encouragement to others.”

Blazing a trail for every little girl who just wants to play, Ila proved that it is possible to do the unthinkable, when you refuse to give up. That she managed to do so with dignity and grace, only further illustrates why hers is a name that should, indeed, be known by all.