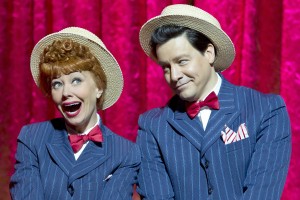 We all still love Lucy!

Everybody’s got a favorite “I Love Lucy” episode. For me, when I was growing up and watching it in re-runs, it was the Vitameatavegamin episode (if you’re a fan, you know it).

One of my earliest television memories is of watching Lucy, Ricky and the gang with my mom. So the live theatrical version I saw on the Segerstrom stage had big bongos to fill, but it did not disappoint. This was not mere homage or, worse, one of those snarky post-modern “ironic” takes on a classic.

The production of “I Love Lucy Live on Stage” (which runs through March 23) was one of the most fun and entertaining shows I’ve seen in a while. Sirena Irwin and Bill Mendieta, who played Lucy and Ricky Ricardo, were charming and convincing as the hilarious duo. They went beyond impersonation and brought much of their own formidable talents to the roles.

Lucille Ball was one of our greatest physical comedians in an era when audiences still responded to slapstick, so to see Irwin go beyond the expected “Waaahhh, Ricky,” tantrums (which 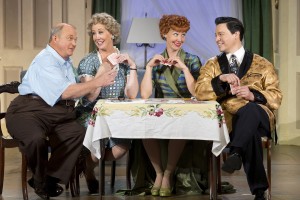 was rollickingly hilarious nonetheless) and watch her jitterbug half-blind was like seeing the original crazy redhead herself.

You’ll love reliving Lucy’s antics through this clever take on the show in the context of a live, Desilu audience, but between the cute commercial jingles and shenanigans, you’ll also find yourself in the lobby after the production humming, “A little dab’ll do ya'” and feeling like the Segerstrom folks put you on a time machine back to the 50s.

On the drive home, as we watched the waning gibbous moon lining up with Mars and a star like a Ricky to Lucy punch line, my husband, Paul, could have sworn he saw Jackie Gleason’s face in that lunar apparition.