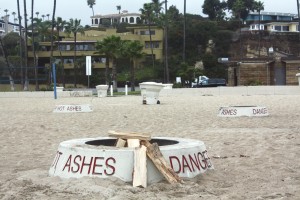 The Newport Beach fire ring debate is heating up again, with residents asked to weigh in with their opinions on several fire ring proposals.

On Tuesday, Feb. 17, City Manager Dave Kiff stood in front of an overflow crowd of more than 100 residents who had gathered at the old city council chambers on the Balboa Peninsula for a Town Hall meeting to summarize the status of the fire rings.

According to Kiff, the city’s fire ring plan is dictated by two state agencies, the Coastal Commission and the Air Quality Management District. Kiff stated the problem with regulating thee fire rings stems from the agencies operating under different missions that force the city into a hazy situation.

The Coastal Commission mandates the city keep wood as an option to burn in fire rings, and retains all 60 fire rings as part of the plan. The city had turned to charcoal burning fire rings last year to help resolve the problem of smoke billowing from wood, but the Coastal Commission said that charcoal does not hold the equivalent burning experience as wood, and had over 5,000 requests from people wanting the wood burning experience brought back to the beaches.

The AQMD told the city that wood burning fire rings have to be 100 feet apart if within 700 feet of any residence. This means all fire rings in Newport Beach are affected and have to be moved further down the beach, which in turn has caused more residents to voice their dissent to the city’s plans.

Residents do not like the smoke from burning wood, as well as the possible pollutants from burning other materials such as plastics and paper that might contain volatile chemicals.

One Peninsula resident remarked, “When the winds shift, I have to shut my window due to the heavy smoke coming my way which makes me very concerned about these plans.” Yet another resident remarked how this issue of wood burning fire rings seems to have pitted some neighbors against each other and that “compassion and understanding” should be the sentiment.

Kiff said he understands the issues created with the fire rings, but the Coastal Commission believes that burning wood is an asset so the issue for the city becomes where to place the fire rings rather than whether to burn wood or not.

“We have about 200 interactions with them a year. They closely monitor our acts. They take their charge very seriously.”

He encourages people to visit the website connectnewportbeach.com and vote for one of several fire ring plans the city has listed. He also suggests giving comments as well as contacting the Coastal Commission, whom Kiff said is midway through the process of making a final decision on the fire rings. They are scheduled to hold a hearing on the issue this June.