A Newport Beach native has come back to the OC to promote his new beverage at the Natural Products Expo in Anaheim this weekend.

Shaun Roberts, CEO and Co-Founder of KonaRed, a healthy drink made out of the fruit that surrounds the coffee bean, will be in town this Friday through Sunday at booth 5523 at the expo to share his story and the science behind the “superfruit” in the healthy beverage.

He and his wife have been producing natural products for about 15 years and started Malie Organics, a line of natural Hawaiian body, beauty and spa products. 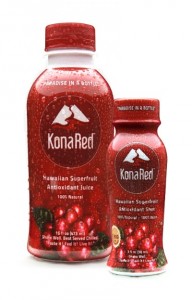 While he was looking for new ingredients for Malie, he came across a press release from the University of Hawaii about the coffee fruit. Roberts, who lives above the largest coffee plantation in the US, Kauai Coffee Co., decided to go and learn.

“I didn’t know too much about the coffee plant at that time,” Roberts said in a promotional video for the company.

Roberts wanted to know more, so he contacted his friend, Tom Greenwell of Greenwell Farms in Kona, Hawaii.

Roberts discovered that, in all of Hawaii, once picked and split for the bean, about 40 million pounds of the fruit shell is thrown away each year.

“That’s a lot going to waste,” Roberts said and he wanted to know if the fruit could be useful.

They picked about 30 pounds of the fruit and turned it into liquid extracts and powders and sent it off to be tested.

“[We] realized that we had a Hawaiian superfruit on our hands that was very valuable,” he said.

They spent most of 2009 in the lab, researching exactly what this tiny fruit held inside. They discovered that it is high in fiber and protein and is full of quinic acid, an anti-viral, photogenic acid, an appetite suppressant, and ferulic acid, an anti-inflammatory.

It is highly bioavailable – absorbed into the cellular system immediately – meaning that it starts working quickly and the benefits are felt right away.

The fruit is enriched with antioxidants and has an Oxygen Radical Absorbance Capacity score of 2,501 per gram, above other similar fruits.

Roberts partnered with his wife, Dana, and colleague Steven Shore, to start the company.

They started out supplying other companies with extracts and powders and just last year launched the KonaRed beverage.

KonaRed debuted in January 2011 and is the only drink on the market featuring the Hawaiian Kona coffee fruit.

The drink started out selling online and at stores in Hawaii and is now available at a variety of chain stores on the mainland.

“The success in Hawaii spilled over to the West Coast,” Roberts said. “We’re expanding rapidly.”

The drink is 100 percent juice and contains a mixture of KonaRed coffee fruit extract, and apple and pineapple juices.

An 8 oz drink of KonaRed has about 75 percent less caffeine than a cup of coffee, Roberts said, but drinkers feel sustained “antioxidant energy” right away, Roberts said.

It’s more of a wellness drink than anything, Roberts said. Although it gives the consumer energy, it’s not categorized as an energy drink, he said.

Using the fruit in food and drinks isn’t entirely new. Ethiopians and other cultures used to eat the fruit and use it in tea and food, Roberts said.

The drinks fit nicely into the natural, healthy lifestyle the company represents. They sponsor several champion surfers and are involved in the waterman community, Roberts said.

“We encourage a healthy, active, outdoor lifestyle,” Roberts said. “The drink encourages that. … These world class athletes on our team believe in the product.”

There are many reasons to choose KonaRed, Roberts explained, they have a sustainable business model, the fruit is highly functional with high levels of antioxidants, it is highly bioavailability, and it’s traceable, meaning it’s made in the USA and can be found in traced to (nearly) his backyard.

“And it will make you feel good,” Roberts said. “It’s wellness you can feel.”