Following two home burglaries in the same neighborhood last week, police sent out a safety notice reminding residents to lock sliding glass doors and windows when they leave their homes.

The first residential burglary was reported to the Newport Beach Police Department Nov. 10 at 3:36 p.m. in the 1600 block of Indus Street. An unknown suspect shattered a window in a rear sliding glass door and pried it open. The burglar stole jewelry and cash totaling $3,800.

The second burglary in the same neighborhood was reported Saturday at 4:24 p.m. in the 20400 block of Santa Ana Ave. An unknown suspect entered the home through an unlocked rear sliding glass door. A laptop computer valued at $2,400 was the only item reported stolen.

In a different area of the city, a residential burglary in the 1600 block of Port Westbourne Place was also reported on Nov. 10 at 9 p.m. Miscellaneous pieces of jewelry totaling $23,820 were stolen.

“Always lock your windows and doors when you go out, even if only for a few minutes,” a police safety statement recommends.

To prevent entry through a sliding door or window, police recommend placing a wooden or metal stick in the track or a security pin or large nail through the frame.

Windows should also have a second level of protection.

“If you arrive home and see something out of place that leads you to believe someone has been in your home, go to a safe location and call 911 immediately,” the police notice states.

Police do not recommend entering the house in case the suspect is still inside. 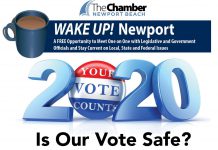