The Beatles’ iconic album “Sgt. Pepper’s Lonely Hearts Club Band” turned 50 in 2017, so the town of Liverpool – the birthplace of John, Paul, George and Ringo – held a Sgt. Pepper at 50 Festival to commemorate the occasion, featuring 13 events to coincide with the 13 tracks on the album.

Kicking off the Festival was a new work by renowned choreographer Mark Morris called “Pepperland,” commissioned by the city of Liverpool.

But wait—how did an eclectic American choreographer end up creating a one-hour dance piece based on “Sgt. Pepper’s” for a Liverpool festival?

“I knew the producer of the festival, and he sort of threw the idea out there with no guarantee that I’d do it,” Morris told me during a recent phone interview. “I took it because it was a surprising and interesting project. I don’t get assignments often, and I thought it would be an interesting thing to do. It was just that simple.”

Simple meant an intense four-month creative process that culminated with the world premiere on May 25, 2017, which drew raves from critics and audiences.

According to the Mark Morris Dance Group website, “Pepperland” features an original score by composer Ethan Iverson inspired by the songs “Sgt. Pepper’s Lonely Hearts Club Band,” “With a Little Help From My Friends,” “A Day in the Life,” “When I’m Sixty-Four,” “Within You Without You,” and “Penny Lane.”

An unprecedented chamber music ensemble of voice, theremin, soprano sax, trombone, piano, organ, harpsichord, and percussion tease out and elaborate on Sgt. Pepper’s non-rock and roll influences. Arrangements of half a dozen songs from the album intermingle with Pepper-inspired original pieces intended especially for Morris’ profound understanding of classical forms: Allegro, Scherzo, Adagio, and the blues.

“I only work with live music, so I knew immediately it should be Ethan Iverson who should confront the music and arrange it and make it into the program that it is,” said Morris. “We chose the repertory that would work the best (from “Sgt. Pepper’s”), the rest refers to the music and the times and the influences and modulations. We worked from the album—that was the source material. As soon as he had something written, I was working with it.”

Morris was choreographing “Pepperland” in between traveling with his company and performing other pieces.

“It was logistically complicated, and we did not know what we had until opening night. We were still adjusting until it opened. I did not know if it would work, but it was a big hit opening night so that heartened us, and allowed us to do it other places.”

Including Segerstrom Center, one of the co-commissioners of the piece. 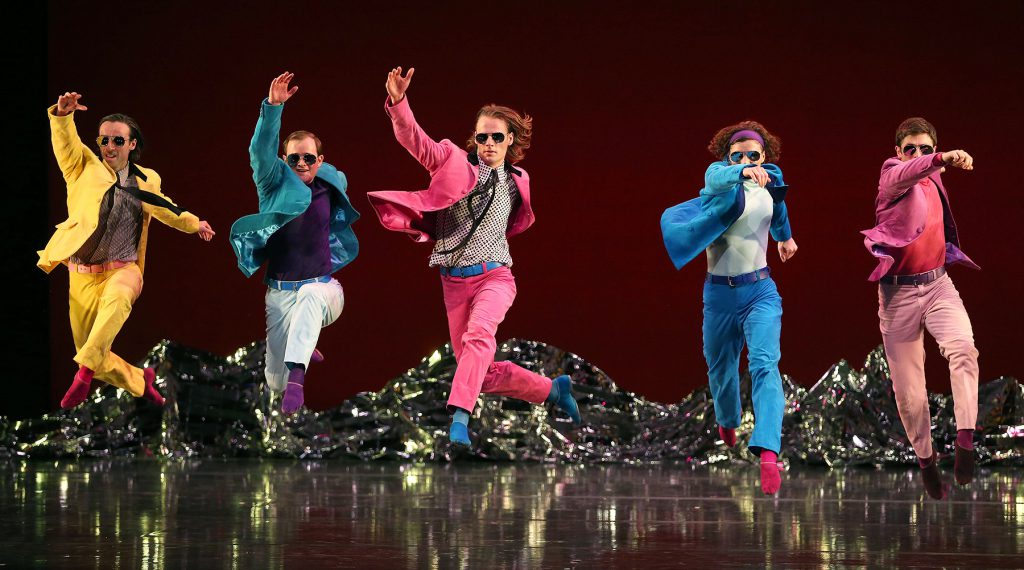 Two words that creep into most reviews of “Pepperland” are joyous and exuberant, although Morris said he does not want audiences to “go into a coma of delight, although we just did a seven-week tour of Britain and they were delighted to have this. It’s not an antidote, parts are touching and moving, it’s not just a barrel of laughs but it is certainly needed these days.”

Morris said that when he first met with his dancers (there are 17 in “Pepperland”), he sat them down and played the entire “Sgt. Pepper’s” album. He wanted them to be familiar with the source material, but he emphasizes that “Pepperland” is not a tribute show.

“I don’t want everyone singing along—that’s a different show.”

Morris said that for the dancers, “Pepperland” is “a one-hour knock down, action packed” affair. Musically, he rounded up some of the top jazz musicians in New York and convinced them to play live on the tour.

According to Morris, the gorgeous costumes by Elizabeth Kurtzman are “based on the period and color palate, I did not what to do a trip down memory lane but it relates to the period.”

I cautiously asked Morris what he hopes audiences will take away after experiencing “Pepperland.”

His response: “Think whatever you want, just watch and listen and you’ll get out alive. I don’t want to dictate a response. People like it, it’s a good show. It doesn’t solve big problems, but it doesn’t have to.”