Movie theaters are still closed in Orange County, so Segerstrom Center is taking cinema outside to its Julianne and George Argyros Plaza for a series of four classic films to be screened in March.

“Hidden Figures” is set for March 5, “The Lego Movie” is scheduled for March 6, “Roman Holiday” screens on March 12, and the musical “Hello Dolly” sings its way to Segerstrom Center March 13. All movies will be closed captioned.

According to Center President Casey Reitz, “Movies and audiences back on the Center’s Argyros Plaza is exciting news to share! With the relaxing of stay-at-home orders, we are looking forward to welcoming our movie buffs back to enjoy an especially good line-up, something for everyone. We will, of course, continue to observe safe distancing and protocols with individual pods strategically spaced to keep everyone healthy and feeling secure.”

The Center’s outdoor presentations on the Argyros Plaza comply with government recommendations for Orange County’s current tier status. Masks must be worn by all guests upon check-in and until they arrive at their assigned space. Contactless check-in will include wellness and touchless temperature checks. Hand sanitizer stations will be accessible throughout the Argyros Plaza. Chairs will not be provided for Movie Nights. Guests are invited to bring folding lawn or beach chairs, blankets and dinners and beverages. Barbecues and grills are not permitted.

“Hidden Figures” was one of the most acclaimed films of 2016 and tells the story of Katherine Jonson (Taraji P. Henson), Dorothy Vaughan (Octavia Spencer) and Mary Jackson (Janelle Monae), all brilliant African-American women working at NASA who served as the brains behind the launch into orbit of astronaut John Glenn. The visionary trio crossed all gender and racial line and inspired generations.

“The Lego Movie” is an acclaimed animated film that follows Emmet (voiced by Chris Pratt,) an ordinary rules-following, perfectly average Lego minifigure who is mistakenly identified as the most extraordinary person (the MasterBuilder) and the key to saving his Lego world. He is drafted into a fellowship of strangers – including an old mystic (voiced by Morgan Freeman,) and Lego Batman (voiced by Will Arnett) – on an epic quest to stop an evil tyrant from gluing the universe together. Will Ferrell, Liam Neeson, Elizabeth Banks and other stars provide voices in this family adventure. “The Lego Movie” is presented with generous support from The Warner Family.

“Roman Holiday” was Audrey Hepburn’s first Hollywood feature film, and she plays a princess who is tired of being the center of social events and a target for the paparazzi. During a visit to Rome, she escapes her guardians in order to explore the city. While a massive search takes place, an American reporter, played by Gregory Peck, makes her acquaintance and pretends not to know her identity as he guides her on an unforgettable day around Rome. Directed by the legendary William Wyler, Roman Holiday is one of the most charming romantic comedies in screen history. 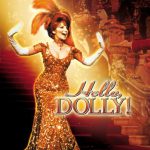 “Hello Dolly” is a beloved 1969 movie musical, set in 1890s New York City. Directed by legendary actor/dancer Gene Kelly, the film stars Barbra Streisand as the bold and enchanting widow Dolly Gallagher Levi, a socialite-turned-matchmaker. Her latest clients seeking assistance are the cantankerous “half-a-millionaire” Horace Vandergelder (Walter Matthau) and a young artist named Ambrose (Tommy Tune), who is in love with Horace’s niece, Ermengarde (Joyce Ames). Dolly’s scheming soon involves Horace’s employees as well as a New York hatmaker, as she tries to cover up her own secret romantic designs.