By Martina Moussa | Special to the NB Indy

The mysterious and tantalizing short film “Le Prince Oublié,” directed by Chloe Aguirre and produced by Hailey Burns (both Chapman University alumni), tells the misconstrued and underappreciated story behind the true origins of motion picture cinema.

As a fellow Chapman student, I had the absolute pleasure of working on the marketing team for this film when it was early in the making. Chloe and Hailey piece together a rich historical story in the most alluring cinematic approach. The historical context of the film is clear and intriguing, despite the stigma of historical films being represented as purely informational.

As expressed by Chloe, “Film history is often underappreciated at our university, so I wanted to step out of my comfort zone to spotlight the truth behind Louis Le Prince’s existence as his discovery was clouded by the Lumiere brothers and Thomas Edison.” 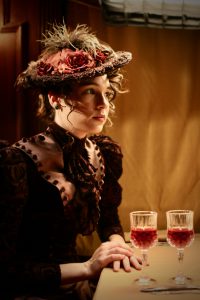 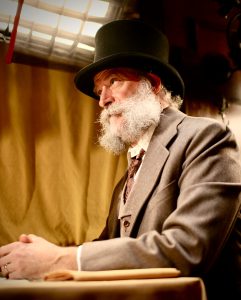 Initially, we are introduced to young Felix and his grandmother, Adelaide, who are attending a screening of the classic silent movie “The Great Train Robbery” at a theater in 1943. Felix is fascinated by Thomas Edison’s work as the inventor of moving pictures. However, Adelaide has a differing perspective on who was the true inventor. She discloses that a great French inventor named Louis Le Prince was robbed of the idea while on a train, leading Edison to take the credit for the creation of motion pictures.

As Adelaide continues the story, we are taken to 1890, where we see a young Adelaide on a train with Le Prince.

Adelaide is bribed by two henchmen from the Edison company to steal Le Prince’s blueprints. However, she develops an earnest bond with Le Prince, which leads her to fight for his right to keep ownership of his work. Despite her best efforts, Le Prince is robbed of his idea and disappears to never be seen again.

Framed in the eyes of young Felix listening to the story, “Le Prince Oublié” offers a chilling yet playful sequence of events with an “open to interpretation” ending. The complexity of Adelaide’s predicament in choosing between what she knows is right and what she was set out to do entrances the audience, leaving them on the edge of their seats as to who will win the blueprints.

The quick-developed friendship between Adelaide and Le Prince is sweet and magical, as though they were meant to cross paths. There’s a beauty in how 1943 Adelaide is still heavily impacted by the events of that train robbery and how she vows to keep the truth of the story alive.

Collectively, the film tastefully highlights such a small story with such an ambitious approach, promoting viewers to tell the stories they expect to be forgotten. The film pushes a buried event in history into the foreground, making it more relevant and memorable than it would have ever been simply lying in a history book.

“Le Prince Oublié” screens on Wednesday, Oct. 27 at 5:30 p.m. at The Lot Fashion Island as part of the “As Life Cycles” collection of short narrative films. Visit NewportBeachFilmFest.com for tickets.