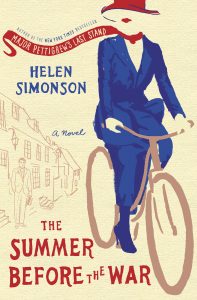 What does one do when the enchantment of the English countryside, once so readily available via weekly trips to Downton Abbey is no longer being piped into our homes?

According to the Washington Post, the “cure for your Downton Abbey withdrawals” is the Under Cover Book Club pick for May, “The Summer Before the War,” by Helen Simonson.

I’ll admit, I never actually climbed aboard the train headed to Downton, but I can definitely appreciate the romance of the turn of the last century, coupled with a stodgy matriarch, and women working “quietly behind the scenes.” By all accounts, this new book seems to fit exactly that bill.

A “delightful story about nontraditional romantic relationships, class snobbery and the everybody-knows-everybody complications of living in a small community,” the novel is the latest from Simonson, the author recognized for her best-selling work, “Major Pettigrew’s Last Stand.”

Set in rural East Sussex, “The Summer Before the War” brings us into the heart of the town of Rye during the summer

of 1914, as England is at the brink of war. The people of Rye call to mind a simpler time, when life went by at a slower pace, and technology had yet to keep townsfolk from having their noses constantly in each other’s business.

While showcasing the innocence of everyday existence when one doesn’t yet know of the life-altering events looming around the corner, the book doesn’t shy away from also following its characters as they enter into WWI, showing how the war affected not only those thrust into its aggressions, but also those left behind.

Lest you think the story is simply one of wartime tragedies, please consider that two of the main characters are women, navigating the life available to them during a time when they were expected to keep themselves confined to those certain “respectable” roles society had defined for them.

One such character is Beatrice Nash, who, at the age of 23, has recently been orphaned by the death of her father and left penniless. A self-described spinster, she has been hired on as the Latin teacher for the small school in Rye. Wanting simply to earn a living and mind her own business, her arrival in the village sets off the type of small town scandal Simonson so perfectly captures with her wry and understatedly comedic writing.

By doing shocking things such as – gasp – riding a bicycle, while having the audacity to be far too educated and attractive for her position as a female teacher, Beatrice ensures that she will successfully attract the attention of everyone in town, thus sabotaging her plans for a quiet life. Even Beatrice’s sponsor, Agatha Kent, matriarch of the story’s primary family, comments, upon discovering that the young lady is neither as old or boring as she imagined her to be, “I may be progressive, but (even) I would never hire a pretty teacher.”

The novel at its outset appears to be a study on life in a small town. As it progresses, however, it evolves into a commentary on the social progression of the era.

We see a town whose men are sent off to war, while the women prepare to care for refugees back at home. As the tale unfolds, we begin to see progress take place, as class distinctions begin to dissolve, unlikely friendships begin to grow, and the women’s rights movement begins to pick up steam.

Add in a little history lesson, courtesy of the accurately portrayed events of WWI, and you have a story, told in a perfectly slow-simmering way that allows the vividly portrayed characters to spring from the page, bringing to life a place and time rich in history.