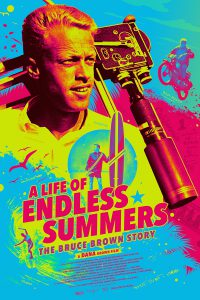 One of the most exciting arts events in Southern California is the annual Newport Beach Film Festival, which celebrated its 20th anniversary in 2019.

This year’s Film Festival was originally scheduled for last April, but was moved to The LOT theaters in Fashion Island August 6 – 20 due to the coronavirus closures. Movie theaters were eventually allowed to reopen and it looked like the Festival was back on track, but then movie theaters were forced to close again after being included in last month’s state edict to move everything outdoors.

Once again, the Festival had to pivot and plan its next move. No word on new dates for this year’s Festival (which at this point may get rolled over into 2021), but there is still good news for film fans.

The Newport Beach Film Festival has announced a spotlight screening of the world premiere of” A Life of Endless Summers: The Bruce Brown Story,” the film originally scheduled to be the opening night premiere for the 2020 Film Festival.

The film will be shown in an outdoor drive-in format on the upper level of the parking structure located between Bloomingdale’s and Nordstrom at Fashion Island on Thursday, August 13, 2020 at 8 p.m. “Doors” open at 6 p.m. Vehicles will be directed to park as they arrive; no pre-assigned parking.

Presented in partnership with Fashion Island and THE LOT, tickets for the screening are on sale now $75 per car, and includes a $20 gift card for THE LOT, a signature Fashion Island tote bag and a limited-edition movie poster designed by artist Troy Lee and autographed by filmmaker Dana Brown and Lee.

This screening serves as a kick-off event for THE LOT Drive- In Summer Movie Series at Fashion Island, continuing weekly through August 30.

“A Life of Endless Summers: The Bruce Brown Story” is Dana Brown’s memorable and personal love letter to his father, legendary filmmaker (“The Endless Summer” and “On Any Sunday”). Dana started the project with his father as a long-overdue road trip they took together traveling up the west coast and Hawaii.

“The film is a tribute to my father. Dad started the whole action sports film genre. He broke the mold, he broke the rules, he broke open the film category. There will never be another one like him,” said Dana Brown. “We could not think of a better fit for our world premiere then The Newport Beach Film Festival, which places such a strong focus on Action Sports programing and continually acknowledges Dad’s legacy in the Southern California Community.”

“The health and safety of our film-goers and staff is our number one priority. While we are disappointed to not present a full festival in August, we are thrilled to bring the community together to celebrate and honor the legacy of Bruce Brown and his impact on documentary filmmaking and surf culture,” said Gregg Schwenk, CEO and Co-Founder of the Newport Beach Film Festival. “With the Festival’s long-standing commitment to action sports cinema and deep relationship with the Brown family, it is the ideal film to celebrate a legendary filmmaker in an iconic setting.”

“The 21st Annual Newport Beach Film Festival is Southern California’s largest lifestyle film festival. “We applaud Gregg and the team for their incredible commitment to keep the spotlight on film, filmmakers and Newport Beach despite these unprecedented times,” said Gary Sherwin, president and CEO, Newport Beach & Company, in a statement.

To purchase tickets for “A Life of Endless Summers: The Bruce Brown Story” and for information about the Newport Beach Film Festival visit NewportBeachFilmFest.com.

Guidelines for the Fashion Island Drive-in