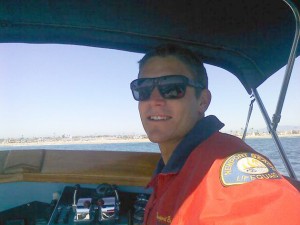 Ben Carlson, 32, a 15-year veteran of Newport Beach Lifeguards, has died while attempting to rescue a swimmer in distress.

According to a press release from the Newport Beach Police Department, on Sunday, July 6, shortly after 5 p.m., a Newport Beach rescue boat identified a swimmer in distress in the six-to-eight foot surf near 16th street.

Carlson entered the water to rescue the swimmer. After he successfully made contact with the man, both of them were hit by a large wave. The other lifeguard personnel at the scene attempted to rescue and assist Carlson, but due to the turbulent water conditions were unable to do so.

In all, 25 individuals conducted a search in the water, supported by 30 others on shore (including City Manager, Dave Kiff) and air support.

Carlson was eventually located at approximately 8 p.m. Newport Beach Paramedics transported him to the hospital, where he was pronounced deceased.

The swimmer he was attempting to rescue was successfully pulled from the ocean and is fully recovered.