John Patrick Shanley’s “Doubt” is among the few plays that can be said to delve into intellectual concepts while also being emotionally potent, using two characters locked in opposition to examine human nature.

All the more intriguing is that both characters play their cards close to the vest, not wanting to provide their adversary an advantage. And so “Doubt” generates incredible tension, with each successive scene upping the ante – but leaves it to us to decide the actual “truth.”

We’re at St. Nicolas, a fictional Catholic church and school in the Bronx, circa 1964. The parish priest, Father Brendan Flynn (Troy Stafford Whitely), takes a progressive view of his role, choosing to befriend rather than discipline the school’s adolescent male students.

An incident involving Flynn, that might be interpreted as inappropriate behavior by him toward one of his students, seems to have been resolved – yet it draws the attention of the school’s principal, Sister Aloysius Beauvier (Della Lisi Kerr).

The fact that the boy in question is the parish’s first black student clouds the moral waters all the more.

In personality, beliefs and temperament, Sister Aloysius is Flynn’s polar opposite, a stern, no-nonsense, toe-the-line scold suspicious of all and trusting of no one.

Shanley deliberately creates ambiguity, a brilliant approach that prompts us to think and analyze. The play raises countless questions yet answers none. The more issues it depicts, the more confusion we feel in sifting through our own thoughts and feelings toward the characters.

We see right off the bat that Sister Aloysius will not stop her crusade against Father Flynn until she has rid the parish – and possibly even the church itself – of him. In uncharted waters, she proceeds with caution, implying everything but stating nothing.

Flynn and Aloysius are as similar as oil and water, yet Modyman and company don’t press that issue. Their subtle approach pays off with the show’s laudable mix of character study with a more familiar element – a battle of wills between two adversaries.

To snare and dispose of Father Flynn, Sister Aloysius enlists Sister James (Victoria Leigh Serra), a novitiate who wishes desperately to please her superior yet who finds Father Flynn kind and wholly likable.

Shanley’s story wouldn’t have worked if set much earlier or later than 1964. His play brilliantly depicts the gender and Civil Rights issues of the time in broad strokes, and NTAC’s staging clarifies and sharpens the script.

The gender and social hierarchy issues depicted by Shanley are brought into sharp focus when Sister Aloysius invites Mrs. Muller, the black student’s mother (Roslynn Samone Glasco), to her office to determine the boy’s future. Shanley uses the scene to further ramp up tension while pointing up the gaping social disparities present in our society 60 years ago.

We instantly see Aloysius’s intolerance of anything “improper,” and Shanley shows us the degrees of cunning and calculation she’s willing to employ to “outfox” anyone who stands in her way.

Modyman’s outstanding cast leaves us no “doubt” that in writing his play, Shanley hit upon something profound.

Kerr’s hidebound Aloysius is severe and self-righteous, suspicious of everyone around her and unable to tolerate anyone who isn’t like herself. She’s convinced she’s best equipped to judge others and deal with them accordingly.

With a cutting edge and sarcasm in her voice, Kerr avoids stereotyping Aloysiyus, rounding out the woman’s severity with more sympathetic qualities, tempered by the character’s sense of right and wrong. Kerr subtly approaches her portrayal, showing that Sister Aloysius is both human and formidable – and that the two qualities aren’t necessarily mutually exclusive. 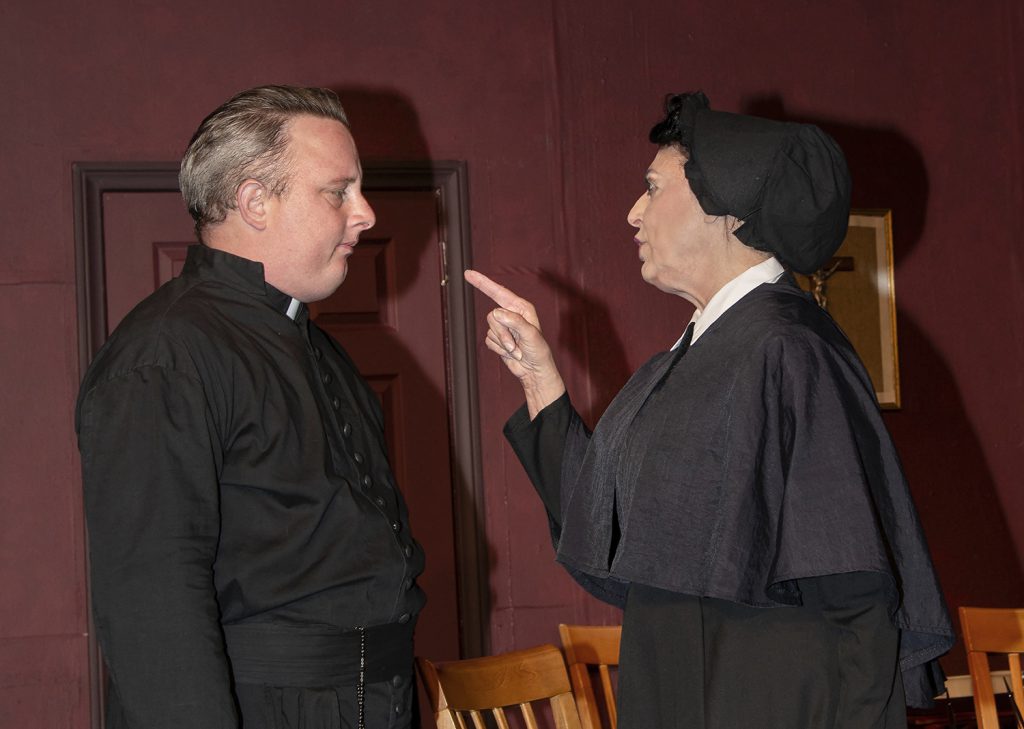 Each act opens with Father Flynn delivering a sermon. Whitely reveals Flynn’s dynamism in the way his character steps out from behind the pulpit, moves around, and reinforces his words with gestures.

Father Flynn adopts leniency and a friendly demeanor as the best way to get through to the boys. While wholly in earnest at all times, Whitely’s face expresses Flynn’s welcoming temperament. Late in the play, while under attack from Sister Aloysius, the actor’s Flynn stands up to her, showing the starch the sister wants to see in Sister James but is unable to elicit.

Sister Aloysius chastises Sister James for being too easily swayed and easily impressed. James lacks the stomach for Aloysius’s machinations and tactics tapped to try to bring Father Flynn down.

Serra, her voice often fluttering, reveals her character’s dutiful nature and the fear and uncertainty that results from Aloysius continuously grinding her down. By the second act, Sister James has become clearly subdued, and Serra shows us the young woman is distraught, no longer able to find joy as a teacher.

Modyman’s skilled direction clearly sketches the onerous weight pressing down on its three main characters – Flynn, Aloysius and James – at all times, born of the restrictive moral obligations of their calling.

While the Mrs. Muller character appears in only one scene near the play’s conclusion, Glasco etches a memorable portrait of a fearless vocal advocate for her pre-teen son, who is essentially defenseless whether at home or in school.

Glasco shows Mrs. Muller is at first submissive to Sister Aloysius, then grows increasingly (and justifiably) angry with her. As Glasco shows us, the woman is off-the-charts indignant that the sister would attack the one person who has shown her son kindness – Father Flynn.

Jim Huffman’s set design at NTAC, of Sister Aloysius’s private office, the nave and pulpit, and the outdoor gardens, carries forth the simple elegance present in Shanley’s script.

“Doubt” is a play of concepts and ideas, yet one that stirs our emotions – a theatrical rarity. Be sure to catch it while you can, because – without a “doubt” – you’ll be debating its issues long after the final curtain call.