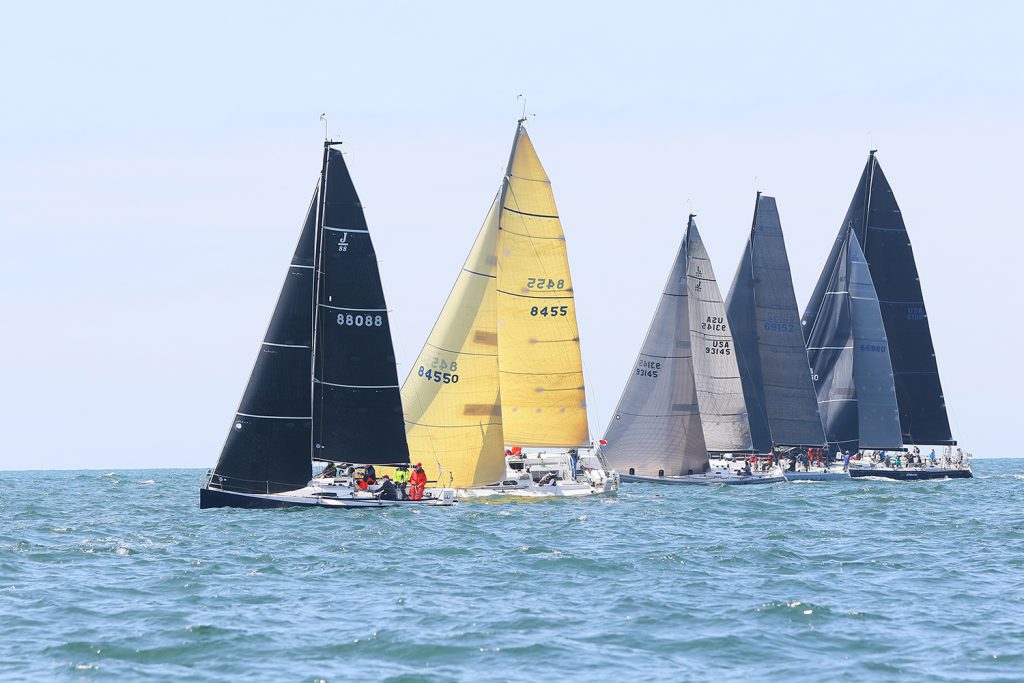 Sailboats make their way down the coast to Ensenada in the Newport to Ensenada International Yacht Race / photo by Jim CollinsN2E is back!

The Newport to Ensenada International Yacht Race, hosted by the Newport Ocean Sailing Association, sets sail Friday, April 22. More than 150 boats of all sizes and classes are entered in the competition, which starts from the Balboa Pier at 11 a.m.

Racers will sail on one of three courses: the sprint to Dana Point, the extended San Diego run around the Coronado Islands, and the perennial favorite; the classic course to Ensenada.

Spectators can watch the race kick off from the Balboa Pier or anywhere along the shore from Corona del Mar down the coast that offers a view of the ocean.

Kicking off race week festivities is the Yachtsman’s Luncheon, hosted by Newport Harbor Yacht Club Wednesday, April 20. Distinguished sailor and entrepreneur John Sangmeister will speak about the iconic race, racing tactics, and NOSA’s three-quarters of a century of service to the yachting community.

Dignitaries from Mexico and Newport Beach, including Mayor Armando Ayala and Mayor Kevin Muldoon, will be joining the festivities this year.

This is the 74th N2E race, and the 75th anniversary of NOSA. Celebratory events in honor of NOSA’s diamond jubilee reportedly began last November when the Mayor of Ensenada made an unprecedented visit to meet with Newport Beach’s Mayor.

According to information provided by N2E, the race was first run in 1948, and has a storied history of mixing professional racers, celebrities, and recreational sailors to become a time-honored tradition for Newport Beach, the City of Ensenada, and sailing enthusiasts who come from across the country to compete.

More than 40 trophy categories in monohull, multihull, and cruising classes give this race a wide appeal and bucket-list status.

In honor of NOSA’s 75th anniversary the celebrations in Ensenada will be two-fold; for the successful racers, many trophy winners, and an organization that for the past 75 years has taken sailors on a fun, competitive coastal sailing adventure; making history and memories along the way.

With an emphasis on camaraderie and competition, the N2E quickly attracted thousands of racers, becoming an event where fun-seeking novices could race alongside celebrities and world-class sailors. A record 675 boats entered in 1983 earning N2E the title of “World’s Largest International Yacht Race.”

Current elapsed-time records were established in 2016 when Tom Siebel’s Orion, a MOD70 broke an 18-year old record with a time of 5:17:26, while skipper Steve Maheen sailed Aszhou, a 63-foot Reichel Pugh to the monohull record of 9:35:34 on his first N2E.

Trophies are awarded in more than 40 classes for the best in ultra-light and maxi-yachts and non-spinnaker and cruising classes, so the race remains inclusive, fun and competitive for anyone who wants to race.