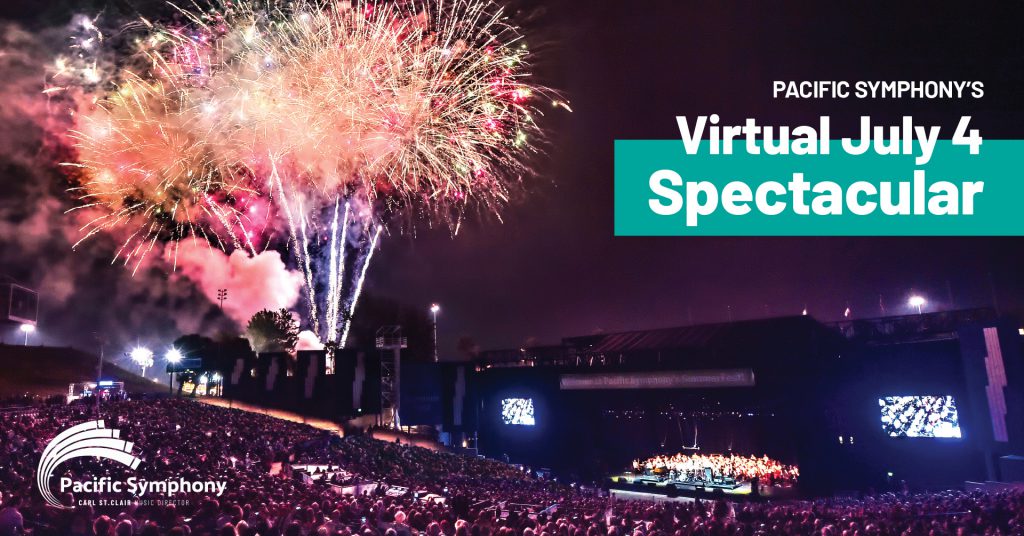 For more than 20 years, the Pacific Symphony has presented an annual Fourth of July Spectacular concert with special guests, a salute to our armed forces, and of course plenty of fireworks accompanied by John Philip Sousa marches.

This year, the much-anticipated concert had to be cancelled due to the coronavirus pandemic, but as they say, “the show must go on.”

The Pacific Symphony has moved their outdoor show online so that fans can still enjoy patriotic favorites, fireworks and musical festivities.

Pacific Symphony Music Director Carl St.Clair, who is celebrating his 30th year with Pacific Symphony, has created a 50-minute streaming program that captures the essence of a summer celebration.

The Pacific Symphony’s first (and hopefully last) virtual Independence Day concert will be available online on July 4 beginning at 6 p.m. The concert can be viewed by signing in with an email address at www.PacificSymphony.org/VirtualJuly4 and will be available on demand for 45 days after that.

According to Pacific Symphony, this July 4th Celebration is dedicated to frontline healthcare workers, and recognizes two great Americans, Charlie and Ling Zhang, for the countless ways they have supported Pacific Symphony and the advancement of music education.

Richard Kaufman conducts John Williams’ “Midway March” from the soundtrack to the classic World War II motion picture “Midway.” The program continues with “76 Trombones” from Meredith Willson’s “The Music Man,” and Kaufman will read the results from this year’s Nathan’s Famous Hot-Dog Eating Contest, the traditional annual competition that takes place on Coney Island every Fourth of July.

For those who might have missed the April 2017 performances by Pacific Symphony of Peter Boyer’s “Ellis Island: The Dream of America” on PBS’ Great Performances, the symphony will perform selections from “Ellis Island,” as well as the annual musical salute to the armed forces.

Renowned country music star, Lee Greenwood, who was the headliner for last season’s popular “Hail to the Heroes” concert, makes a guest appearance with a special message and song selection specifically for Pacific Symphony audiences.

And of course, the concert concludes with a grand finale of fireworks orchestrated to “The Stars and Stripes Forever” by John Philip Sousa.