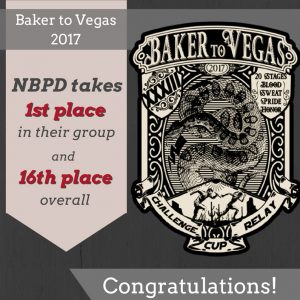 For the thirteenth year in a row, the Newport Beach Police Department’s Running Team placed first in their category at the Baker to Vegas 120-Mile Challenge Cup Relay. Running teams from 270 law enforcement agencies from around the world competed in the 33rd annual relay, which was held on March 25 and 26. The Newport Beach team has placed first in its category fifteen times in the last seventeen years. This year, the team placed 1st in their Division (agencies with 100-150 sworn officers) and 16th overall.

Twenty runners, four alternates, and a team of 16 support personnel participated in the grueling race over a course that included climbing over 5,000 feet in elevation, and descending through the winding back roads of the Mojave Desert.

The non-stop race began 24 miles outside the town of Baker on Saturday afternoon at 4 p.m. and ended in Las Vegas on Sunday morning shortly after 7 a.m. The team completed the event in an impressive 15 hours and 6 minutes, shaving 15 minutes off their final time from last year’s event.

“I want to applaud our running team and our support crew,” said Chief Jon T. Lewis. “The runners, who have spent months training for this event, showed incredible physical fitness and mental fortitude during the long and difficult relay. But, above all, it is the teamwork and dedication of everyone involved that makes me proud. Congratulations on a job well done.”

All participants train on their own time and pay their own way to participate in this event. Sponsors helped support the NBPD Running Team by contributing funds for the entry fee, team running shirts, support vehicles, and other miscellaneous expenditures.