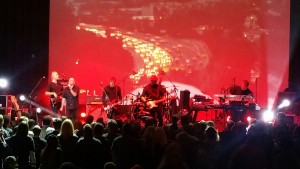 In 1979, Pink Floyd unleashed the double-album behemoth “The Wall” on the world.

A large-scale rock opera, it follows a character named Pink, loosely based on Roger Waters and ex-member Syd Barrett, who loses his father in WWII, becomes a rock star, and brick by brick isolates himself behind a literal wall.

Waters, who gleaned the idea from his own disillusionment with the rock star lifestyle and seemingly the world at large, is widely credited with having his ego outgrow the band during the making of this album.

Many consider “The Wall” to be the beginning of the decline of Pink Floyd’s music, while others contend the 81-minute giant is a masterpiece. Either way, seeing Which One’s Pink? complete the performance of the album smoothly, and without a hitch, was impressive, and a night to remember.

Which One’s Pink? has a menagerie of members. The typical lead guitar, rhythm guitar, bass, and drums are represented, as are two revolving keyboardists responsible for filling in for Richard Wright, as well as supplying all the sound effects that permeate “The Wall.”

A revolving door of background vocalists was also a part of the show, including a young girl who plays the groupie at 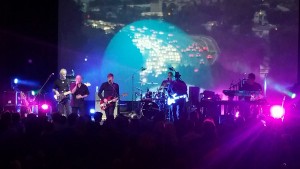 the beginning of “One Of My Turns,” and manager Dan Johnson whose sole purpose seemed to be to shriek the hallowed line “How can you have any pudding if you don’t eat your meat?!” from the band’s only number one song, “Another Brick In The Wall Pt. II.”

Paul Samarin handled both the Roger Waters vocal duties as well as the David Gilmour lead guitar shredding, an impressive feat that Samarin handled with ease. After his blistering solo toward the end of “Comfortably Numb,” a man in the audience awe-fully exclaimed, “That was amazing!,” as a bewildered smile spread across his face.

The highlights of the show were pretty much the highlights of the album. The aforementioned songs, as well as “Mother,” “In The Flesh” and “Run Like Hell” were all audience favorites, and the screen behind the band displaying everything from the necessary brick wall to silent movie footage gave the performance the visual component so essential to the original “The Wall” tour.

More than a concert, seeing “The Wall” performed live with an audience is like watching someone’s favorite movie with them. They know when all the good parts are coming, the best jokes, their favorite lines, like during the musical theater-esque “The Trial,” with the audience enthusiastically singing key lines that they have known by heart since they saw the real Pink Floyd do it so many years ago.

After receiving a standing ovation for what was the band’s last show of the year, Which One’s Pink? returned to the stage for an encore.

“We’ve been doing this for 18 years, and we love doing it,” one of the keyboardists proclaimed, before the band launched into the absolutely epic “Echoes,” with the audience loving every second of its hefty 16 minutes.