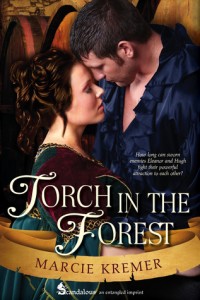 In this YouTube era of instant gratification, and gratuitous everything, the old adage “less is more” is often forgotten. Not so for Orange County writer, Marcie Kremer, author of the new historical romance, “Torch in the Forest.”

Like a seasoned burlesque performer, Kremer believes that hints and innuendos are more enticing than an all out sexual barrage, which leaves nothing to the imagination. After having read her latest work, I’d have to say I agree.

Relying more on sidelong glances and brushes of lips across knuckles than bodice-ripping bedroom scenes, “Torch” is a romance set in the 1200’s which follows our heroine, Eleanor of Strathcombe, an eighteen-year-old widow charged with running the medieval estate endowed to her late husband.

While a widow, Eleanor’s joke of a marriage was to a boorish man who sought to satisfy his more base urges elsewhere, and thus she is as unsullied as a field dusted with new snow.

Being inexperienced in the ways of love and seduction, we see Lady Eleanor as she begins to experience romantic stirrings for the first time, and in the most unexpected of places.

Although “Torch” is a love story to be sure, there is more afoot around Strathcombe and the surrounding estates than lute playing and flirtations. Someone is poaching in the Strathcombe forest, and that of its closest neighbor, Wykeham Castle, run by the surly Lord Hugh.

It falls to Eleanor to uncover who is committing these misdeeds under her nose, a task that many doubt she is capable of, being merely a woman–and a trusting one at that.

Staying true to her family’s motto of Honor et Fides (Honor and Loyalty), Eleanor staunchly supports those who have provided loyal service to her throughout her years as mistress of Strathcombe, a trait seen by her counterpart, the Earl of Wykeham, as a fatal flaw.

Undeterred, our heroine sets out to prove her intuitions correct, all while navigating countless sticky situations, not the least of which being the lecherous attentions of her liege lord, the Earl of Litchfield, who holds the rights to Strathcombe Castle and its surrounding lands.

In a showcase of quick-thinking, and superior intellect, Eleanor shows us that even a lowly woman can get the job done, in a time when respect and power were afforded to the fairer sex in a very small measure. As is the case of every true heroine, our Lady relies on her wit, not her wiles, to save her skin.

Keeping “Honor et Fides” always in the forefront of her mind, Eleanor’s actions uphold her values always, and prove in the end to those skeptical of her loyalties that a well-placed trust is indeed an asset, rather than a weakness.

At the close of the book, we, of course, discover who is behind the nefarious deeds, and all aspersions on Eleanor’s character are proven to be unfounded. Will she find the love however, that is worthy of her virtue and loyalty?  Alas, I cannot say.  You will have to discover that on your own.

I will say however, that the love story told within Kremer’s pages is at once both sweetly innocent and steamily enticing, allowing the reader to use their own imagination to let the seductions fully unfold.

“Torch in the Forest,” while a romance, is one that values morals and propriety more than cheap thrills.  With its well-placed use of nuance, it is proof that hints and innuendo are more enticing (and romantic!) than crude escapades, and reminds us also, that one can never underestimate the power of an intelligent woman.

“Torch in the Forest” is available online via Amazon and Barnes & Noble. To learn more about Marcie Kremer and her book, please visit marciekremerromance.wordpress.com.