I have long avoided the topic of climate change, for good reason.

I prefer to make fun of Al Gore for inventing the Internet rather than jousting at his global warming pitch, and get bored debating the merits of extreme thinking on both sides of the issue.

First, a couple of my beliefs that establish the foundation of my green thinking.  People, animals and the planet are resilient and adaptive to constant change.  Unintended consequences play a role in green thinking as many make beneficial choices in one area yet create impacts in another (think high speed rail or solar).

Economics have to make sense.

Lastly, I seek facts and data to make informed decisions.

So, I am at a recent water buffalo industry meeting and the presenter is a real life rocket scientist, Bill Patzert, Ph.D., Jet Propulsion Laboratory.  Patzert’s true genius is to take a complex issue and dumb it down while making it entertaining.  He spent most of his time going through data regarding El Niño and La Niña.  Oceans are a key element to study.

When La Niña cools water at the equator, it causes winds, trade winds and jet streams.  When it stays to the north, it is the Diva of Drought.  But, in El Niño, the jet streams come south and bring rainfall.  Yet, La Niña has also produced the Diva of Drench.

2010 had record rainfalls yet this year is one of the driest years in historical records, demonstrating the rainfall rollercoaster we are on.  Normal is a cycle on a washing machine and not used to describe California rainfall.  Patzert goes on to describe an “arctic oscillation” that produced “Snowmagedon” in the Northeast, and the Pineapple Express, an atmospheric river, that brought us 13 wet, cold days in December 2010.  And, today we are flip flopped with the Diva of Drought yielding dry weather.

Confused?  So was I.  Basically there were a couple observations and conclusions.  In the last 15 years, there was either an El Niño or La Niña, no El Nada.  So it might be a trend?  But, when Patzert looked at the last 100 years, there were no trends.

However, when looking at temperature, and water temperature, there is a clear trend indicating no doubt that the oceans are getting warmer.  Carbon dioxide is absorbed into the ocean, increasing Ph yielding more acidity.  Warming temperature trends were overlaid with the Industrial Revolution and carbon emissions, demonstrating cause and effect.

Seems pretty factual to me, as long as the debate recognizes that people, animals and the planet are resilient.  Humans impacted our waterways and our air, but we cleaned them up.  Copper on boat hulls polluted Newport Harbor, so we chose improved options.  Cars polluted with nasty smog, but we made changes in behaviors and now we can see mountains again.

Should China be able to experience the same economic prosperity associated with America’s industrial revolution?  Of course.  But can’t we and they do so without the same environmental consequences?

What’s all this have to do with the price of tea in China?  Based on the evidence in the record, although confusing and sometimes contradictory, I personally make choices, informed decisions, that seek a beneficial environmental outcome – cautious of unintended consequences – and that make economic sense.

Eric Fulsang of Newport Beach wrote a letter to the OC Register that posed some excellent questions.  People can’t predict weather a few days or weeks into the future.  How can we expect climate models to be accurate in 10, 20 or 100 years?  If we could predict the future climate, and we agreed we did not like it, then what climate would we agree on?  If we agree on a perfect climate, how would we control it?  So if an Ice Age is forecast, do we increase greenhouse gases production to prevent it?

So, is climate change manmade?  I will conclude the same way that the rocket scientist did.  Climate change is anthropogenic.

While I prefer not to debate global warming with you, I am very interested in your green thoughts – [email protected]

Attracting ‘Good Bugs’ to a Garden 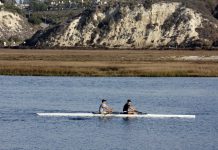 Going Green: Desalination Plant is Bad for the Region