NOTE: Indy reporter Sara Hall compiled this look back at what made headlines in the NB Independent during 2015. This week, we cover January through June.

— Travis Marton, 23, of Valencia was struck and killed by a vehicle that fled the scene at 2:56 a.m. New Year’s Day at East Coast Highway and Newport Coast Drive in Corona del Mar. Marton was crossing the street at the time of the incident.

Within 10 minutes of an alert being issued to nearby law enforcement agencies, a Laguna Beach police officer came across a yellow cab van in the downtown area which had extensive front end damage. Ronald Lloyd Aviles, 56, of San Clemente, and charged him with felony hit-and-run.

The action reverted 30 rings, half at Big Corona and half at the Balboa Pier, immediately back to wood burning.

Several of the rings were shuffled around to accommodate South Coast Air Quality Management District’s 444 rule, which allows wood burning fires on the beach if they are spaced at least 100 feet apart from each other and 700 feet from homes.

— The 2015 Newport Beach Restaurant Week was held Jan. 19 through Feb. 1 was a success with both diners and restaurateurs. Restaurant booking for Restaurant Week on the Open Table website were double that of last year.

Surveys of consumer behavior also showed positive trends, including that about 91 percent said they would participate again next year and 98 percent would recommend Restaurant Week to a friend or colleague.

— At the Jan. 27 meeting, council members argued over a normally routine item: The minutes from the previous meeting. After hearing a few public speakers oppose the wording of the minutes from that meeting, specifically a motion and vote in approval of a plan using wood in the fire rings, Councilman Keith Curry pulled the item from the consent calendar.

The temporary plan is the only thing that was approved by city council at the last meeting, Curry argued. He moved that the minutes to be amended accordingly.

The motion to amend the minutes failed 4-3, with only Curry, Councilman Tony Petros, and Mayor Pro Tem Diane Dixon supporting the change. The minutes, as originally written, were eventually approved 5-2, with Curry and Petros dissenting.

— Questions about newly elected city councilman Marshall “Duffy” Duffield’s ability to vote on certain issues without a conflict of interest were raised, and answered – in part- by the Fair Political Practices Commission.

The city sent an inquiry to the commission asking about Duffield’s duties with concern to possible conflict of interest while the council is considering items related to the harbor.

The FPPC provided some advice on the matter, including that on subjects like rent for commercial tidelands pier permits/leases, dredging projects, zoning, and work where a Duffy Boats client may be involved, there would be a conflict of interest and Duffied would not be able to participate in any of those decisions.

— City Council voted 4-1 on Feb. 10 to reduce the fees for residential pier permits. 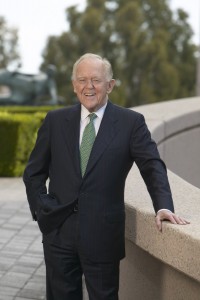 The resolution revised the residential pier permit to protect residential piers from unlawful seizure, adjusts the rental fee to reflect a revised fair market value of $0.50 per square foot, and reduces the pier footprint to exclude the interior U-shape of a slip.

There were also two minor revisions to the pier permit terms that simplified the payment of rent language and new property right protection language.

— Henry Segerstrom, the leading arts patron in the county and the patriarch of the Segerstrom family, died on Feb. 20. He was 91. Segerstrom helped develop his family’s lima bean fields into South Coast Plaza and was instrumental in the growth of the arts in Orange County. Segerstrom Center for the Arts is named after him.

A public visitation and tribute was held at Fairhaven Memorial Park in Santa Ana.

— The city held a dedication ceremony on March 8 for the Benjamin M Carlson Lifeguard Headquarters, named in 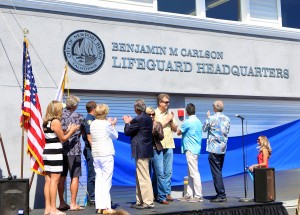 honor of Ben Carlson, a 15-year Newport Beach lifeguard veteran who lost his life in July 2014 while rescuing a swimmer in distress.

Carlson’s parents, Chris and Teri, and then-Mayor Ed Selich addressed hundreds of supporters in the crowd.

The CCC approved a settlement agreement, cease and desist order and restoration order to permanently stop unpermitted large scale vegetation removal (or mowing), restore damaged habitat, and remove some oil wells. In an effort to discourage similar activity in the future the agreement also imposed fines.

While not admitting to any wrongdoing or liability, NBR agreed to the settlement terms.

— On April 7, after about three hours of passionate discussion, nearly 50 public comments on two separate items, and several split votes, the Parks, Beaches and Recreation Commission approved several proposals to recommend to the City Council regarding blackball.

The proposals included reducing hours between 40th and 44th streets, a small, but popular stretch of water on the Balboa Peninsula, and keeping blackball at the Wedge the same.

— Council members and Arts commissioners attended an hour-long Master Arts and Culture Plan and Arts Funding discussion at the Newport Beach City Council Study Session on April 14. Council members were asked to weigh in on the plan, and help direct staff on how to proceed in implementing (or not implementing) the plan’s recommendations. 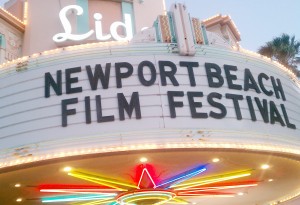 The staff report noted that the city has four potential sources of revenue for funding any or all of the recommendations in the Master Arts and Culture Plan, including using the general fund and private donations.

— The 16th annual Newport Beach Film Festival returned to the city between April 23-30 with the theme “Know New Art.”

More than 350 films from 50 countries were screened in a variety of categories. Approximately 50,000 people attended the weeklong event.

— City Council voted on May 12 to move forward with allowing a single commercial water-propelled jetpack operator in a specific location.

At the May 12 meeting, staff, following the direction from council at the last meeting, presented an ordinance prohibiting water-propelled vessels of any kind in the harbor. They also brought an alternative ordinance allowing one 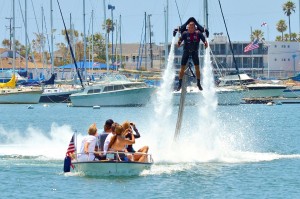 commercial operator in the Turning Basin area between Lido Marina Village and the PCH on a year-to-year revocable permit.

The move limited the time and days residents can water their lawns, asked residents to cut their water usage by 25 percent, and required that leaks be repaired within 24 hours.

In the decision filed on May 20 by the Fourth District Court of Appeal, the 31-page document noted that the trial court agreed with the Conservancy’s claim that the city violated the Planning and Zoning Law and its own general plan by its alleged failure to adequately coordinate with the California Coastal Commission before its approval of the Project. On the other hand, the court rejected the Conservancy’s claim that the city violated the California Environmental Quality Act by failing to identify in the environmental impact report the ‘environmentally sensitive habitat areas.

— After nearly two decades attempting to revive the historic Balboa Theater and make it a vital component of revitalizing the Balboa Village, the Balboa Theater Foundation Board of Directors decided the time had come to sunset the project and return responsibility of the destiny of the property back to the city.

In its final decision before disbanding, the board also decided to donate their remaining funds of $175,000 back to the city through the nonprofit Newport Beach Arts Foundation, specifically earmarked for oversight by the Newport Beach City Arts Commission.

— The California Coastal Commission approved a plan with a mixture of both charcoal and wood burning fire rings in Newport Beach.

The CCC voted 9-1 on June 11, with Commissioner Mark Vargas dissenting. They approved the city’s submitted Plan 17, minus the Corona del Mar State Beach portion. The CdM 24-ring plan was placed aside after a letter from the State Parks asked for a postponement.

Plan 17 called for 32 rings around Balboa Pier and a total of eight at Newport Dunes. The plan also included several ADA-accessible fire rings. 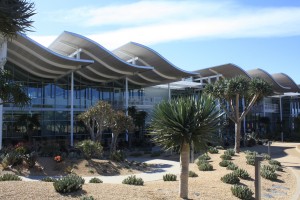 — On June 16, City Council unanimously voted to hire an outside firm to analyze the process of how the Civic Center price tag ended up at just over $140 million.

The motion to conduct the close-out audit/post-implementation review included points that it is not to exceed a budget of $100,000 and that it will be completed as soon as possible.

An amendment distancing the council’s involvement with the process also passed.

The Rt. Rev. J. Jon Bruno, Bishop, Diocesan of the Episcopal Diocese of Los Angeles, entered into an agreement to sell the St. James property and buildings to developer Legacy Partners Residential, Inc. for approximately $15 million. According to a fact sheet from Lagacy Partners, the planning vision for the church site is for “luxury residential for-sale homes, no apartments.”

Many congregation members protested the move. They were given 30 days to deconstruct, and remove stained glass and the ashes of loved ones that have been kept at the church.