The Newport Beach Film Festival may have only been a month ago, but it left an indelible impression on us, and provided the catalyst for a serendipitous chain of events from coast-to-coast, that won’t be soon forgotten.

Chris and I had heard about a culinary film premiering simultaneously at Newport Beach Film Fest and New York’s Tribeca Film Festival, and were immediately intrigued. Sally Rowe’s documentary, “A Matter of Taste,” chronicles the life of Chef Paul Liebrandt—one of the most talented, yet controversial, chefs in New York—and his passion for epicurean perfectionism. The film intimately details Liebrandt’s rise, fall, and rise again, in the cutthroat world of haute cuisine.

Curious to know more about this culinary wunderkind, who was awarded three stars for his “daring, distinctive style,” from the New York Times in 2000, we interviewed Rowe about the star of her documentary and Liebrandt’s penchant for precision. The conversation taunted like an amuse bouche—it only hinted at what was to come.

Chris was lucky enough to attend the NBFF film screening, but unfortunately, I had a prior engagement. However, luck showed a capricious turn. When I suddenly found myself in Manhattan working on a film, I decided to mix business with…business. I made a few calls and secured a reservation at Corton, Liebrandt’s restaurant in Tribeca. One problem: I had to be there in an hour and a half.

My girlfriend April and I rushed across town to make it to the appointed time, and gratefully arrived with five minutes to spare. Once we stepped into the restaurant, we immediately felt calmed. The soft green of the banquettes, offset by white walls etched with a floral motif, created a zen-like ambience.

Once seated, Drew Nieporent, one of America’s most respected and celebrated restaurateurs, and founder of Myriad Restaurant Group—which operates Corton, Tribeca Grill, Nobu, and many others—greeted us.

After a brief conversation, Neiporent excused himself—he had to return to Nobu for the evening.

Immediately upon Neiporent’s departure, Corton’s sommelier, Shawn Paul, introduced himself, then proceeded to open the Robert Biale Zinfandel Black Chicken Napa Valley 2007, which I had purchased moments before at Brite Buy Wine Shop. Not certain what to expect from Corton’s menu, I had consulted with Brite Buy owner Debra Pabst, who noted my requirements and guided me to the small batch zinfandel—a fantastic choice, that paired well with most of the dishes.

Suddenly, three amuse bouches magically appeared, and there began my ascent into molecular gastronomy heaven. Savory Pine Nut and Parmesan Marshmallows evaporated like air, and the Ramp-Potato Croquettes and Sesame Almond Financiers disappeared quickly. To say Liebrandt tickled our tastebuds is an understatement. If you lack a conversation starter, you needn’t worry here—the flavors and textures of every morsel invite discussion…and lots of questions.

Our first course was a Foie Gras Chantilly with Cucumber Gelée that melted in the mouth—the gelée providing a cool contrast to the earthy and velvety whip. Our second course arrived floating on mini ice blocks: Tasmanian Ocean Trout with Mandarinquat, American Sturgeon Caviar Tapanade, and Spring Pea Ice Cream on Crispy Skin.

At this point, my admiration for Leibrandt’s mad genius started to root; every spoonful of foam, each placement of a wafer-thin vegetable, or pruned micro-green hanging precariously in the balance, heightened my appreciation for his dazzling displays and reverence for his craft.

Corton’s tasting menu offered one surprise after another—each dish more visually stunning than before; sheer works of modern art. My only complaint—the menu descriptions didn’t qualify the dishes. I wanted to know every minute detail.

Ironically, we overheard our server stating I couldn’t possibly be a critic because I was too friendly and asked too many questions. That I heard the comment is enough. We won’t elaborate. Someone more egocentric might have taken offense, but I took it as a compliment—Liebrandt’s cuisine elicits curiosity and wonder. Plus, I gather a happy critic is a bit of an anomaly, if not literally an oxymoron.

Our fourth course, the Milk-Fed Porcelet, with Tamarind, Fennel Blossom, Absinthe, Black Brioche Crumb Onion, Pork Belly, Flowering Thyme Jus, and Potato Fondant with Comte Cheese, was the most delirious combination of flavors. I found myself, more than once, simply shaking my head in awe, confounded by the textural complexity of each luscious bite.

Our palate cleanser, Mango Sorbet and Lemongrass Yogurt, prepared us for the descent into gastronomic gluttony.

By this time, we had finished our Zinfandel, so I asked Shawn if he would pair a glass of wine with the remaining courses. He paired three marvelous tastes with dessert: Domaine de Barroubio Muscat de St. Jean de Minervois 2007 with the Rhubarb, Orchidea Glacé, Cucumber and Sorrel Granité; Château Filhot Sauternes 2001 with Brioche, Passion Fruit, Coffee and Banana; and Blandy’s Bual Madeira 1977 with Smoked Caramel, Popcorn, Brown Butter Crumble and Pomegranate.

If that was not enough, clear boxes of ménardies arrived at the table containing pâtes de fruits (Cassis, Passionfruit), Pimm’s Cup and Mojito macaroons, and assorted truffles (Espresso, Ganache, Meyer Lemon, Salted Caramel, and Bourbon-Honey). Served as a complimentary gift to all guests, I suggest caution—there’s no limit.

Corton was a sublime epicurean experience unlike anything I’ve ever encountered. Deserving of its two Michelin stars, Liebrandt’s cuisine is bursting with imagination—undeniably radical, seductively intriguing, and pure artistry.

For those of you who missed the Newport Beach Film Festival screening, “A Matter of Taste”airs on HBO June 13.  Perhaps it will inspire you to fly to New York, too. Bon Appétit. 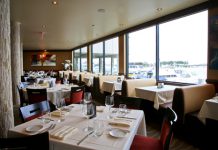 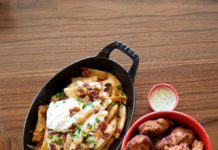 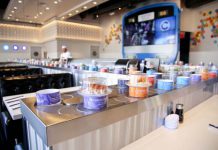