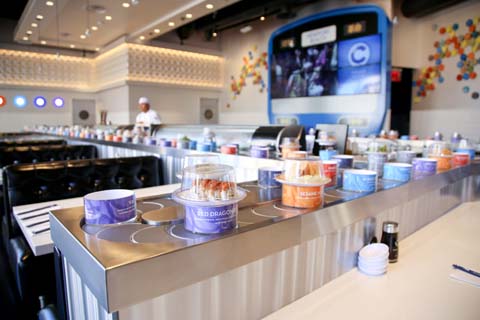 The buzz at Blue C Sushi is palpable, from the vibrant art on the walls to the movement of the conveyor belt offering delicious dishes one after another. Head chef Joe Lee flits around the restaurant, encouraging the other chefs to break the barrier between the cooking station in the middle of the space and the booths that flank the belt to interact with diners. The comfortable energy that pervades the recently opened Fashion Island eatery comes from a laid-back atmosphere that’s friendly to groups of teenagers, young families and lunchtime businesspeople alike.

The dishes that pass by the tables run the gamut of flavors, with familiar favorites and unexpectedly appetizing creations, such as the tuna BLT and vegan V8 rolls. Rather than claiming a plate right away, take a glance at the menu to discover more interesting fusions and reinterpretations of well-known classics.

Appetizers like the tuna tostada, which balances the usual fixings—tomatoes, cabbage, guacamole, peppers and onion—on a wonton shell demonstrate the creative thought behind the menu. The white fish starter packs a punch of flavor belied by its understated title. Seared and topped with ginger, garlic, citrus soy sauce and cilantro, the savory bites are just enough to whet your appetite for what’s to come.

For those looking to try something new, the ceviche roll is a savory choice that juxtaposes the different approaches to serving ocean fresh fish from the Eastern and Western hemispheres. A delicate combination of avocado, pico de gallo, cucumber and orange zest complements the shrimp and scallops for a titillating taste that recalls the seafood dish.

Equally flavorful, the live scallops come artfully arranged with the bivalves prepared two ways: one with Sriracha and cilantro, the other with garlic and ponzu, a Japanese citrus sauce. Joe is emphatic that nothing goes to waste, pointing out that the fleshy white muscle, which is only a fraction of the interior of the scallop’s shell, is the only part people are used to ordering from a menu. Using the remaining meat from the scallop, he creates a mouthwatering and aromatic soup made with shitake mushrooms, garlic and white and green onions.

With soups, cooked dishes, rolls made to order, options on the moving belt and an array of sakes to pair, it’s easy to overindulge at Blue C. However, it’s worth the discipline to save a few bites for dessert—especially for the richness of a warm tempura brownie. Served a la mode, the sweet and salty treat offers the perfect finish to a meal.

In its entirety, the menu at Blue C matches Newport’s bold dining scene. “In Newport, people want something new and different,” Joe explains, adding that all the plates on the belt are served in half-orders for those who aren’t fully committed to adventurous eating.

This user-friendly approach to sushi demystifies the cuisine into something more approachable to newcomers while still providing quality ingredients and fresh menu options to even the most seasoned sushi lovers. Allowing your taste buds to cast a wide net and sample the range of choices is all part of the experience.