After the Millennials could be like any other southern California DIY band, although they’re set apart by the one in 70,000 chance that the band is made up of not one, but two sets of twins.

Seth and Sarah, 22, make up the keyboard and bass, while their younger siblings, Nate and Naomi, 18, play drums and sing.

The four siblings have that quintessential, family-next-door charm—not too surprising for a family from south Orange County. They joke with each other, relaxed, and that translates well to their music. They don’t try to be anything they naturally aren’t. They enjoy watching “Twilight” with their friends.

A song on their upcoming EP is titled “Taylor Lautner on Roller Skates.” The “Twilight” reference, Naomi says, “is about a guy I liked who looks like Taylor Lautner, but also roller skates. I wrote the song about him, for him. It’s very tongue in cheek, and I think it’s fun for our generation. There are a lot of Shark-boy and Lava-girl references on it too.”

Audiences will get a kick out of the pop culture inspiration at their upcoming show at Campus JAX on Friday, August 21.

They cite their fa 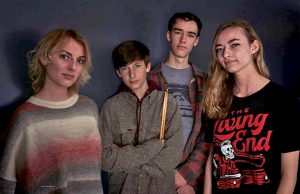 vorite artists as contemporary Southern California Christian Rock bands, like Switchfoot. Their dad plays in an 80s acoustic cover band, and they grew up listening to his stripped-down strumming of 80s classics. Their introduction to performing started at a young age. They recall joining their dad onstage for gigs at Disneyland and local Orange County venues.

At those gigs, Naomi and Nate relished the spotlight, while Sarah and Seth preferred the background.

The siblings don’t spend much time poking around in the past. Naomi, a modern day singer-songwriter, doesn’t need to know who Joan Baez is, and writes her lyrics in her iPhone notes.

They group is very present and future focused, which is the main reason they chose their name, After the Millennials.

If you’re looking for a fun, laid-back night of music, then their Friday night show at Campus Jax is perfect.

My observations: The group has natural talent, and the steps they need to grow musically are not hard to achieve if they are serious about their musical careers, which they seem to be.

Naomi’s voice is stellar in its natural sound and tenor, and she’ll eventually benefit from a larger vocal range. A few changes in keys in their repertoire would give the band more variety—enough to produce a full-length album. A lead guitarist could give them a fuller sound, if they eventually choose to go that route. 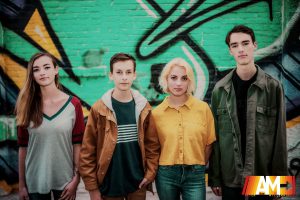 However, they have natural musical talent, which isn’t common to come by. The fact that it’s present in all siblings is amazing in itself.

Some of their songs, such as “Dream of Me,” sounds like they can already be found in the “Twilight” Soundtrack. “Dream of Me” is a tune Nate wrote about the loss of a family friend, and it has an effortlessly relaxing coffee-shop melody that could be played in a Portland Starbucks.

Their new, self-produced EP is due to come out in a matter of months. Most songs available now were written by a then 15-year old Naomi. The group is eager to show how much they’ve grown.

“All my favorite songs are new songs,” Seth says. As the piano player, he’s the only one in the group who’s had any real technical training.

The siblings started at young ages. Most began with piano, but Seth was the only one who stuck with it. The others moved on to instruments they connected with.

Musical influences for the siblings vary from Foo Fighters to Paramour. Each instrument choice seems to reflect their personalities. Nate, who sometimes likes being the center of attention, chose ear-catching drums. Naomi, also fond of the spotlight, is the lead singer. Sarah, who doesn’t mind being in the background, plays bass. Seth, who prefers to watch from a distance, sits at the piano.

Seasoned after played the Wiltern in Los Angeles, their Campus Jax show will be a fun way to cheer on the community.

They have a song called “Make Believe” about feeling isolated during Covid-19—a relatable issue to everyone, even among four siblings.

Overall, After the Millennials is a great group of gracious and lively twins. They are lucky enough to have stumbled upon natural musical talent, and the community can look forward to watching them grow both as musicians and people. Be sure to catch them as they take the stage at Campus JAX this Friday.

For information on After the Millennials, visit https://afterthemillennialsband.com/