This opening night for Alvin Ailey American Dance Theater at Segerstrom Center for the Arts was different than others. There was the same buzzing energy and the house was packed, as usual, but as the lights dimmed and straggling audience members rushed to take their seats, a sentimental mood set in.

It was announced that the company would perform the show in dedication to the late Donald McKayle, a renowned choreographer who set numerous works for the company. McKayle, a longtime dance teacher at UC Irvine’s Claire Trevor School of the Arts, had just passed away a week earlier. 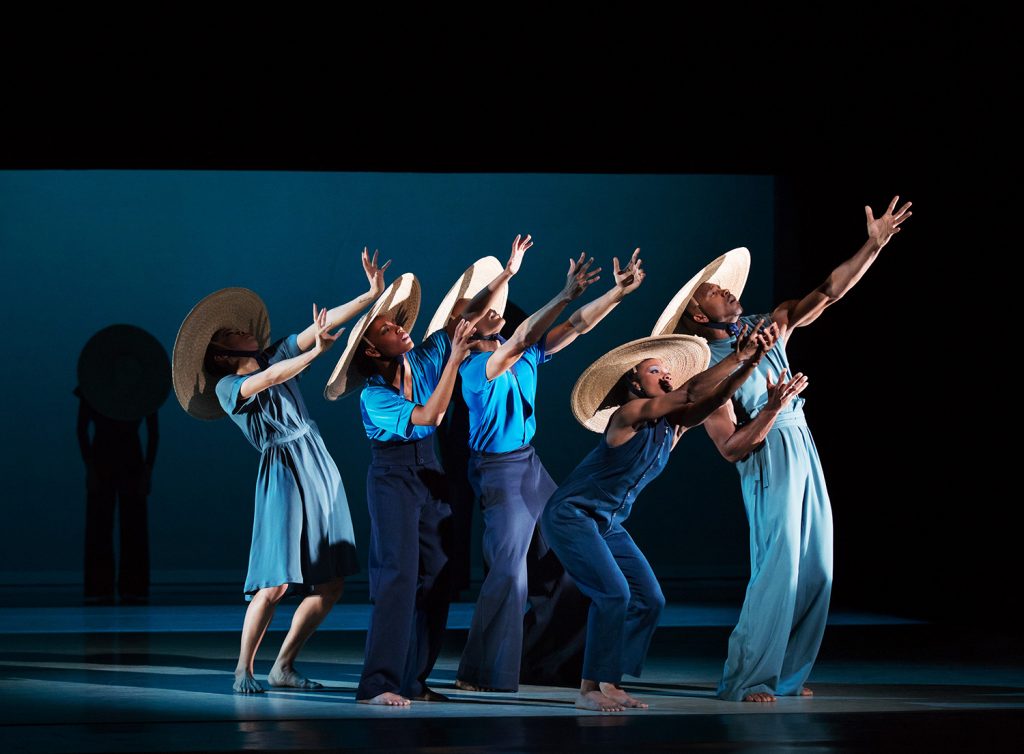 The stage opens to rich blue tones and dancers in wide-brimmed sun hats, looking like something out of Picasso’s Blue Period. And, the piece is very blue. Gestures of trying times with arms outstretched, yearning for something. Vibratory motions of working on a field and tugging on roots resonate within the dancers. Within this struggle, between the performers, is an unbreakable community, ready to endure the pain of inequality as they continue on together.

The performers emulate John Coltrane’s sporadic, musical outbursts such that they were the ones commanding him what to play. This attention to musicality is refreshing to the eye as detailed musicality is something that many contemporary, modern choreographers are straying away from.

The show is mostly cohesive with mood of hopeful blues throughout, with the exception of Twyla Tharp’s “The Golden Section” with music by David Byrne. That piece is plain old fun.

The costumes make the first impression as dancers came out of the wings in jazzy, tight-fitting metallic gold costumes with matching jazz shoes, wristbands and leg warmers. It was an eye-widening moment, something no first-timer would have expected the Ailey company to come out in. The piece is reminiscent of a disco party with small hip shakes and shimmies in combination with massive jumps, impressive technique and dynamic duos. “The Golden Section” is one that embraces the community and expression that Alvin Ailey American Dance Theater was founded upon. It is a piece that cannot go missed amongst the other handfuls of pieces in the Ailey repertoire, not only because of the shining costumes but because of the high energy level.

The work alludes to the incredible versatility of the Ailey dancers. While the company is mostly comprised of modern works in Horton technique, they also can do jazz, hip-hop grooves, and embody a multitude of characters.

To bring the show full circle, Ailey closes every show with “Revelations,” one of the most-watched and important dance pieces in history. It is a reminder of when the company began, and why the company began. Though the piece does not appear to be as technically challenging as some of the other pieces, it the most genuine storyteller, just the way Mr. Ailey intended it to be. “Revelations debuted in 1960, but the piece still holds the same value.

The entire program goes by with ease. It prompts clapping and small shouts along the way, and by the end, it feels like the entire theater is part of the Ailey family. It’s a show of excellent skill, complex history and no ego. A sequence of a dozen bows followed the final choreographic reprise of “Revelations.”

It was a powerful, energetic, and emotional evening.