“Let’s go surfing now, everybody’s learning how, come on a safari with me…”

The 1960s were a tumultuous time in our history, and while they gave rise to many “counter-culture” movements, perhaps the most all-encompassing here in Southern California was that of the surf culture.

From the beautiful Orange County beaches, all the way down to the Mexican border, surf dogs inspired by the Beach Boys, Moondoggy and Gidget, or simply the sea itself, had miles of coastline from which to launch their boards and hang ten in the salty waves.

While blessed with killer surf right here in their own backyards, there were some who felt the siren song of the sea a little deeper in their bones.

Heeding the call of the popular song, they set out, quite literally, on a “Surfin’ Safari” of their own, in search of the perfect wave.

Kevin Naughton and Craig Peterson were two of these surf pilgrims. What began as a trip south of the border for two young men would stretch into a 10-year global journey, a popular series of articles in Surfer magazine, and status as pioneers who were surf travelers before surf traveling was even a thing.

Now, the two OC Kahunas are bringing the tales of their globe-trotting surf expedition to Newport, as they present “Search for 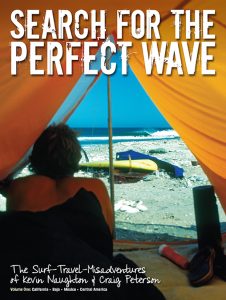 the Perfect Wave,” the next installment of the Newport Beach Public Library’s “Library Live” series.

Appearing on Thursday, Dec. 1, the two will serve as tour guides to one of the surfing world’s most epic journeys, when they share slides, memories, and surf lore, the likes of which few have been fortunate enough to experience.

Both men moved to Southern California in their youth, and quickly took to surfing. After graduating high school, Naughton begin his travels, going north along the Pacific coast, as well as to Hawaii, Europe, and Central America.

Meanwhile, Peterson, a couple of years his junior, and still in high school, had already secured a position as a staff photographer for Surfer magazine.

During Peterson’s senior year at nearby Edison High School, he had enough credits to forego taking classes during the second semester. So, armed with a camera, Surfer supplied film, a small purse of traveling money, and a promise to his parents that he would return for graduation, he set out with a buddy to join Naughton in Central America, and begin his surf quest.

After meeting Naughton in El Salvador, the group set out, in a beat up old VW bug, in search of the mythical Petacalco. Eventually, their journey would take the two, referred to by many as “surfing’s Lewis and Clarke,” to destinations such as Senegal, Liberia, Morocco, France, Spain, Ireland, Mexico, Barbados, and Fiji.

Along the way, Peterson shot photos, and both men penned accounts of their adventures, which they periodically dropped in the mail, headed back to the states, and Surfer magazine.

These accounts came to be known as the “Naughton-Peterson Adventures,” and were published between 1973 and 1989, with two of their accounts making their way onto a 1995 list of “The 10 Greatest Surf Trips of All Time.”

“The Far Shore,” a documentary about the decade-long adventure, was produced in 2002, and last December, surfing’s own dynamic duo released, “Search for the Perfect Wave:  The Surf-Travel-Misadventures of Kevin Naughton & Craig Peterson,” a book recounting the first stretch of their journey, through California, Baja, Mexico, and Central America.

Having seen waves that many surfers will only ever dream about, it seems as though hearing about the pilgrimage first-hand is an opportunity that is not to be squandered. Surfers both young and old, will want to hear their account, if only to commune for a moment with kindred souls.

The event will take place at the Central Library, and will include the presentation, Q&A, book sales and signing, and light refreshments. Admission is free, however, a $10 donation is suggested, and reservations are required.