Of course, Banks was banking on baseball, not The Bard, who once stated “all the world’s a stage.

Next weekend, the stage will be placed in the outfield of a baseball diamond at the Bonita Canyon Sports Park, where Shakespeare will indeed play two when Shakespeare by the Sea attempts to hit home runs with its touring productions of “The Tempest” on July 18 and “As You Like It” on July 19.

The dramatic yet humor-laced “The Tempest” is considered Shakespeare’s final play, and is set on a remote island where Prospero, the rightful Duke of Milan, uses illusion and manipulation to conjure a storm that lures his usurping brother Antonio and the complicit King Alonso of Naples to the island.

“As You Like It” is a clever romantic comedy that takes place in the Forest of Arden, and contains many of Shakespeare’s most famous speeches, including “All the world’s a stage…” 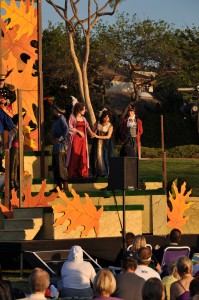 the Sea. “These are such wonderful, and very popular, plays. The great thing about Shakespeare is that you can interpret it a million ways, so it’ll be exciting to see what our team comes up with as they bring these timeless classics fresh and new for our audiences to experience.”

A wonderful play is no good without wonderful production values, including site lines and sound—just two of the challenges faced by Coffi and her theater troupe when staging Shakespeare in such a large space as Bonita Canyon Sports Park.

“Fortunately, Newport Beach rents a stage—they’re the only venue that does that. Other venues have a cement slab or grass,” Coffi told me when they were preparing for last season’s tour.

The elevated stage makes it easier for the audience to see the production, she said, while a handful of floor mikes on the stage and large speakers placed at various points in and around the audience make it easier to hear the dialogue.

“Those speakers really help with large audiences, especially with Newport Beach—it’s our largest venue in both size and the number of people that attend,” said Coffi.

A typical Shakespeare by the Sea show might normally draw several hundred people, but in Newport the crowd often numbers over 1,000.

The plays, which start at 7 p.m., generally end around 9 p.m., which is shorter than most Shakespeare productions. Coffi said she’s cut the shows down a bit to make them more palatable for outdoor summer audiences.

“Back in Shakespeare’s time people had all day, but for today’s audience, two hours is a good amount of time,” she said.

In addition to the staging challenges, Coffi tries to hire actors who can vocally project, and that are available to perform in both plays.

Pre-show activities (including a raffle) begin at 6:45 p.m. Both of these summer events are free and open to the public, supported by the City of Newport Beach and the City Arts Commission.

Attendees are welcome to bring blankets, beach chairs and a picnic dinner.

Founded in 1998, and funded entirely by donations and grants, Shakespeare by the Sea’s performances are made possible through the support of the Orange County Community Foundation (based in Newport Beach), Supervisor Don Knabe, and The Los Angeles County Arts Commission.

For more information on Shakespeare by the Sea, visit ShakespeareByTheSea.org.