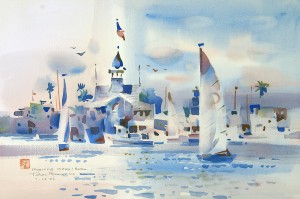 Brandt, who lived and worked in Corona del Mar for most of his life, created hundreds of paintings of Southern California coastal scenes, many of them set in Newport Beach, Corona del Mar and Balboa Bay.

The location of his residence and studio, and site of the Brandt Summer School of Painting, “Blue Sky,” in Corona del Mar, was recently designated a “Historic Point of Interest” by the City of Newport Beach.

A plaque bearing this designation will be dedicated by Mayor Rush hill and unveiled by Joan Brandt Scarboro and Shelley Brandt Walker, Brandt’s daughters, at a ceremony on Saturday, Nov. 1 at 11 a.m. at the end of Goldenrod near the historic Goldenrod Footbridge.

At 2 p.m. on Nov. 1, a special Centennial Celebration Program featuring an overview of the life and art of Rex Brandt by exhibit curator Gordon McClelland, will begin at 2 p.m. in the Friends Meeting Room at the Central Library, 1000 Avocado Avenue.

Special guests E. Gene Crain, artist George James and Brandt’s daughters will be in attendance and participate in a discussion.

A reception hosted by the City Arts Commission will follow from 3 to 5 p.m. in the Bamboo Courtyard at the Central Library.

A retrospective exhibit of original Rex Brandt watercolors will be on display at the Central Library beginning Nov. 1 and running through Dec. 15. There will be a projected visual presentation of Brandt paintings along 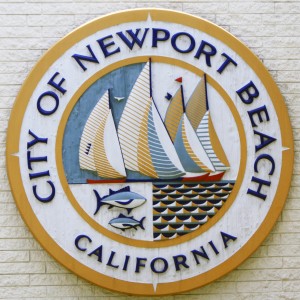 with photographic images of the artist painting on location in Newport Beach.

Paintings loaned for the exhibition are from the Mark and Janet Hilbert Collection, the Jeff and Bernadette Olsen Collection, and the Van and Diane Simmons Collection.

In addition to the opening day program, Jennifer Martinez Wormser, library director at the Laguna College of Art and Design, will present a lecture on Visual Sensations of Light: Celebrating the Life and Work of Watercolor Artist Rex Brandt on Thursday, Nov. 20 at 7 p.m. in the Central Library Friends Room.

The City Arts Commission initiated the Centennial Celebration to recognize the integral role that Rex Brandt played in the California watercolor movement and his exceptional relationship with the City of Newport Beach.

Not only did the renowned watercolorist live and work in the City for most of his life, he also created the iconic Newport Beach City seal, served on the Newport Beach Public Library Board of Trustees in the 1940s and 1950s, and helped establish the Newport Harbor Art Museum.

Both he and his wife, artist Joan Irving, were actively involved in the City’s historical and cultural development. In 1947, Brandt, Irving and Phil Dike opened the Brandt-Dike Summer School of Paint at “Blue Sky” in Corona del Mar.

It was estimated that over 4,000 artists, both amateur and profession, attended classes during the 38-year history of the school.

Rex Brandt passed away on March 21, 2000 in Corona del Mar, having painted nearly to the end of his life.

For more information on the event or exhibition, visit NewportBeachLibrary.org, newportbeachca.gov/culturalarts, or contact the Newport Beach Cultural Arts Services office at (949) 717-3801.