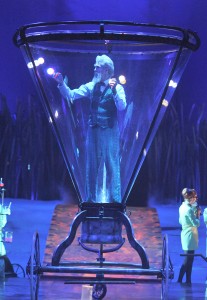 Greg Kennedy never intended to be a professional juggler.

And yet, anyone who watches the new Cirque du Soliel show, “Totem,” now playing a limited engagement at the OC Great Park, would swear that Kennedy was born to juggle.

He started juggling as a hobby when he was a kid, but after graduating from high school, Kennedy studied engineering and entered the geotechnical industry. However, after work he practiced juggling, using problem solving and principles of physics to create new forms of manipulation.

In 1996, at age 25, Kennedy entered an international juggling competition and was crowned the world champion. He quit his engineer job to focus on juggling.

“A friend offered me a contract to work on a cruise ship for six months, and I never went back,” recalled Kennedy during a recent phone interview. “For the last 20 years, I’ve been building a wealth of work involving modern forms of manipulation.”

“They called me up and said we have a director who would like you in his show,” said Kennedy. “I came to Montreal, met Robert Lepage (director of “Totem”), did a workshop, we liked each other, and six months later I was in Totem.” 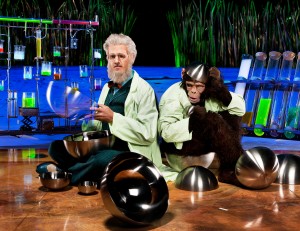 with a unique blend of costume and showmanship.

Kennedy plays the role of a bearded scientist, which is fitting since, according to the show’s description, “Totem” traces “the journey of the human species from its original amphibian state to its ultimate desire to fly, and explores the ties that bind man to other species, his dreams and his infinite potential.”

While Kennedy shares stage time as a reoccurring character, his solo spot comes when he performs a fascinating feat of having a staggered stack of boxes he’s holding collapse into one another, and then juggles seven balls while standing inside a clear, life sized cone.

“I think of juggling as an exchange, more objects than hands,” stated Kennedy. “I use juggling patterns but throw them on the inside surface of the cone. 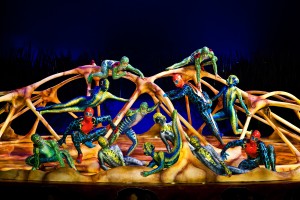 Kennedy also uses glowing balls, which he says Cirque du Soliel has perfected with the use of 72 LED bulbs encased inside a silicon sphere.

“They’re radio controlled by the lighting board,” noted Kennedy. “It’s a beautiful effect, and emphasizes the patterns of the ball.”

Kennedy says his character is more than simply a juggler.

“I am looking to represent a sense of play–in addition to my act, I become an observer. The character is a bridge to humanity. All the acts in the show have a specific theme that ties to evolution, and striving and wanting to become something better.”

Kennedy will mark four years touring in “Totem” in April 2014. Although he’s married with children (ages 6, 9 and 10), his family is on the road with him.

“They provide for the families of artists—they have a school on site, they provide a three bedroom apartment, transportation,” said Kennedy. “I’ve never had the luxury of having my family with me. It’s been a wonderful experience.”