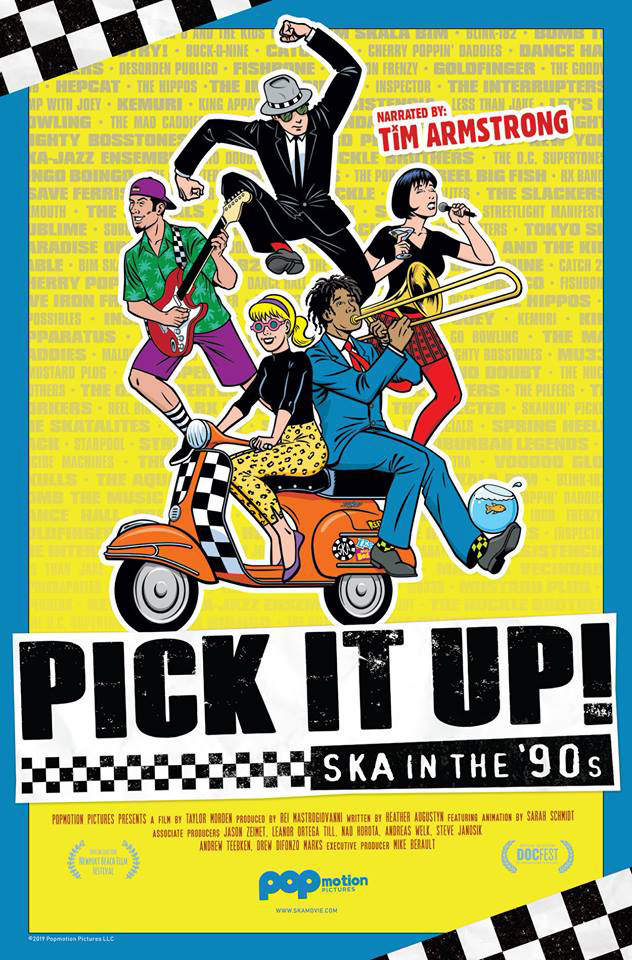 Orange County has long been a hotbed of creativity, especially in the music department. We had an explosive punk rock movement in the late 1970s and early 80s, which is when I was playing drums in a band called Desperate Living while managing other local bands and producing demos in a recording studio.

I was at that time a fan of two-tone ska bands, including The Specials, The Selector, Madness, and similar bands whose infectious music dared listeners not to dance to the syncopated beats.

A ska revival occurred in OC in the mid to late 1990s, with a host of new bands paying tribute to classic ska music while putting their own spin on the genre.

The revival faded away, but many of these bands remain as vibrant and vital as ever.

That’s what I was excited to learn that the Newport Beach Film Festival would be screening the World Premiere of a documentary called “Pick It Up! – Ska in the ’90s” that screens Friday, April 26 at 8:30 p.m. at the Lido Theatre.

“Pick It Up! – Ska in The ’90s” is part of the festival’s Music Film Series, and chronicles the rise and fall of the third wave of ska music that is still thriving today. The film features members of Reel Big Fish, The Mighty Mighty Bosstones, No Doubt, Sublime, Less Than Jake, Save Ferris, Fishbone, The Specials and more.

The screening takes place the evening before the popular Back to the Beach music festival event in Huntington Beach, where many of these same bands will be performing.

I was able to preview “Pick It Up!” and found it to be a joyful and musical exploration of ska music within the Orange County setting. It has fun and lively narration from dozens of band members and other ska experts. The film is inventive and visually stimulating.

After watching “Pick It Up!” I was reminded of the exuberance of the LA and OC punk scene in the late 70s, and how some of those early bands are still around (X plays the Pacific Amphitheatre this July).

Anyone interested in ska music, or the OC music scene in general, will love this film.

Parallel Love: The Story of A Band Called Luxury

The journey of Luxury, a band from small-town Georgia, who, on the cusp of success, suffer a devastating touring wreck with long-term consequences. In the intervening years, they continue to make records and three members of the band become Eastern Orthodox priests. Through interviews and archival footage, ‘Parallel Love’ tells the gripping and poignant story of Luxury and documents the making of a new record, now as priests.

A young woman follows a beautiful stranger into the countryside. What unfolds is a series of sensual and intimate tales, set to the music of In The Valley Below.

The Sonics, once an unknown band from the Pacific Northwest, is known as one of rock ‘n’ roll’s most influential bands. Featuring interviews from all five band members in addition to iconic artists such as Pearl Jam and The Sex Pistols, Boom dives deep into The Sonics’ legacy and how they became a worldwide phenomenon even 50 years after their heyday.

The Cavern Club: The Beat Goes On

Liverpool’s world-famous Cavern Club has hosted numerous musical legends over the last 60 years, including The Beatles. This documentary chronicles the fascinating history of one of the most beloved clubs in the world, featuring interviews from previous club owners as well as bands who have played at this historic venue.

One of Nashville’s most celebrated and influential venues, the Bluebird Cafe is a tiny cafe in a Nashville strip mall that nurtured the careers of now distinguished singer-songwriters such as Taylor Swift and Faith Hill. The Bluebird faces an uncertain future but has the support of some of country music’s most important figures. Featuring unforgettable performances by Taylor Swift, Garth Brooks, Maren Morris, Vince Gill, Jason Isbell and many more, we’ll explore the past and present of this accidental landmark and hear the origin stories of country music royalty.

During the 1950s, one dance craze dominated the clubs and ballrooms of New York City: The Mambo. Originally from Havana, Cuba, this upbeat form of dance swept through the U.S. years before Fidel Castro and the Cuban Revolution and left a lasting impact on the nation’s history and culture. Set in Miami Beach, Havana and New York, this fun, upbeat film features a lovable, somewhat zany collection of dancers, musicians, DJs, club owners and record company moguls – the mamboniks. They’re still hitting the dance floor — in their 70s, 80s and 90s!