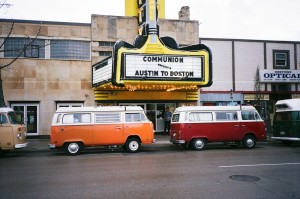 Gill Landry of Old Crow Medicine Show, whose gravelly voice provides the film’s stoic narration, sets up the tour’s experimental essence, saying, “This was either going to be the most brilliant tour ever, or a miserable train wreck.”

The tour and film are projects of Communion, a promotional outfit co-founded by Mumford and Sons’ Ben Lovett. Communion’s mission is to give small-time artists with big-time talent a platform in various cities around the world, by curating tours and getting the bands decent-sized crowds.

The tour featured in “Austin to Boston” begins on the last day of the SXSW (South by Southwest) festival in Austin, 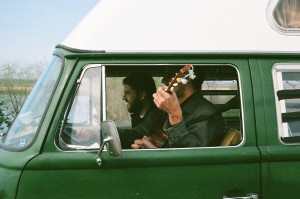 Texas, as all the bands pack into their vans and head to Oklahoma City. It is here that the artists begin being introduced.

All except Nathaniel Rateliff are Brits, which provides much of the documentary’s charm. There is a real joy derived out of seeing people experience America for the first time, and nothing provides a bona fide sense of America like being on the road.

As the tour moves on to Kansas City, Minneapolis, and Nashville, the music really begins to shine. All the bands are exceptional, providing folky, singer-songwriter fare, while The Staves (three sisters with absolutely hypnotic harmonies) throw in dashes of American traditional. Ultimately, the musicians selected provide the perfect soundtrack to the film’s rain-dappled, 16mm footage of the road, the sky, and the great American landscape. 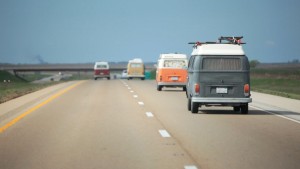 The film does get a bit “On The Road” cliché at times. The road is referred to as, “One long goodbye” several times, and there is an emphasis placed on the humble camping grounds they spend the night in. Shots of guitars being strummed by the campfire run rampant, as do shots that linger warmly on wonder-filled faces in the audience. And yet, it’s never over the top.

Truly charming moments, like the stop-off at the birthplace of Superman, and a quick game of “knock-out” with locals on a basketball court in Illinois, are pretty enchanting to watch. These scenes, combined with more emotionally-charged moments, like Rateliff returning to the exact intersection where his father died in Missouri, make the film shine.

Overall, a sense of community is infused in every scene. These people, once strangers, wind-up becoming like family. Idle time is spent together, with no phone, laptop, or tablet in sight.

“Austin to Boston” portrays music as a happening, a scene, which is something that has been largely lost with top 40 artists and their $200 per ticket arena tours. The film leaves the viewer with the strong desire to be along for the ride, or at the very least, leaves them with some new music to listen to.

“Austin to Boston” screens on Tuesday, April 28 at 5:15 p.m. at The Triangle, and Wednesday, April 29 at 8 p.m. at Island Cinema. Visit NewportBeachFilmFest.com for details.