A little after 6 a.m. on November 7, we left the Newport Harbor jetty. I had a view of Catalina Island while standing on the deck of the fly bridge at an elevation of 10 feet.

Last Saturday, November 23, we returned a little before 6 p.m. on approach at 10,000 feet with a view of Catalina Island and then Lido Isle.

What a trip! Did I just say that?

We met our group of 40 yachts in Ensenada to depart south and end in La Paz. All the yachts were power boats in the FUBAR fleet with the largest brand of eleven yachts being Nordhaven. These stout little ships were designed for long voyages in comfort. Their owners were loyal to the fraternity and conversed on the VHF radios constantly about every facet of questions and answers about fuel burns, cruising speed, even window washer fluid used to their glee. 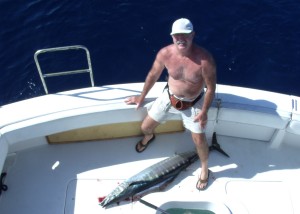 We landed the largest calico bass I’ve ever seen off the Cedros Island kelp beds (8-10 pounds), and several medium size halibut in Turtle Bay. Also included were two striped marlin and one blue marlin which we grabbed the bill on, pulled the hooks and released them, then watched them swim off.

Our course led us to high points along the ocean bottom, “banks” as they are referred to, which added a little distance and time to our course. Our cruise from Turtle Bay to Magdalena Bay was our most productive trip. We landed a 12 pound yellowtail, a 14 pound yellow fin tuna, three wahoo about 28 pounds to 70 pounds, one of which which I had the pleasure of landing and have included in a photo.

From “Mag Bay” to San Jose del Cabo, we landed a dorado which I’m disappointed to mention that the other avid fishermen had more luck. The reverse of that luck was when Ronnie A. saw the much looked for Frigates circling porpoise and yellow fin tuna, and Ronnie B. landed an 80 pound yellow fin tuna.

Except the marlin, all fish were filleted at the end of each day and partially consumed for dinner that evening, with the remainder vacuum-bagged, frozen and taken home. There is nothing better than eating fresh fish. It is quite different than store bought. It can spoil you.

There’s more to mention in future columns and I will take this time to thank my shipmates, Ronnie A, Ronnie B, and “Swabby” Steve. Ron Hirt (Ronnie B., owner of Sundance) allowed me to join him on the voyage of a lifetime and I am most grateful for this opportunity. Thanks boss!