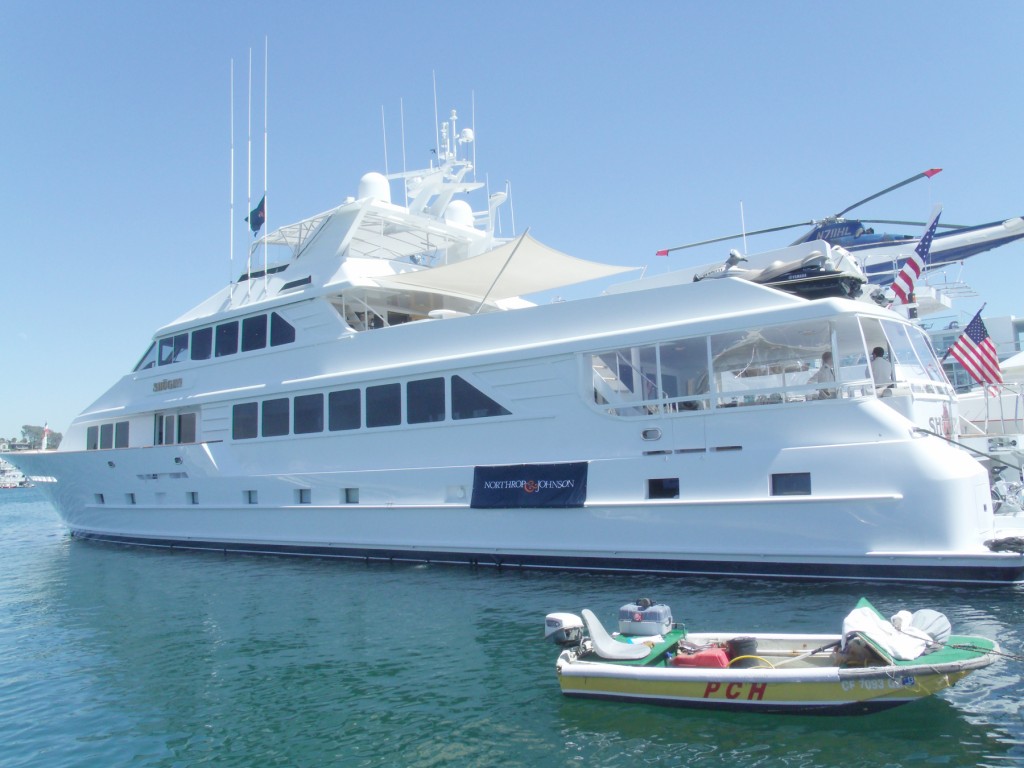 Last weekend was the 40th Lido Village Boat Show. It appeared to be pre-recession in size, attendance and broker enthusiasm. We attended on a warm and beautiful So Cal Friday. It’s no wonder our area weather is the envy of the rest of the country.

I was pleasantly surprised at the large crowd inspecting the hundreds of yachts. I’m sure it put a big smile on the promoter’s face.

Among the crowd, the lovely Judy Belle and I bumped into my childhood friend Doug Brownell and his wife Alice. We grew up together in the wonderful era of the 50s in Cliff Haven on the cliff above the Dover and Coast Hwy area.

Among our wide open fields and near his home on St. James Place, was the “gully” which had a stream and lush vegetation where we played among toads and pollywogs. Much has changed since then, and this area is now known as the Environmental Nature Center. I nostalgically prefer to call it the “gully.”

Several yachts at the show were noteworthy to me. The 38-foot go fast Scarab is back in production and had the “Kama” name attached to it. This name is from the 70s and is well known all over the world in off-shore power boat racing.

Our own Newport bay front resident Betty Cook, or the “Racing Grandma” as she was known, was World Champion in unlimited off-shore power boat racing. She and her crew not only raced “Kama” but also built her speed boats in Costa Mesa.

This was a grand racing era for drivers which included Rocky Aoki of “Benihana” fame, Al Copeland who raced a 50-foot catamaran and created “Popeye’s Chicken,” and even Hollywood actor Don Johnson.

This era also included the Newport Bushmills International Power Boat Race. I can’t ever recall a more exciting local spectator ocean event than the Bushmill. The 120 mile race included two laps by the spectator fleet of hundreds of Newport yachts. The pre and post race always started inside the harbor with a parade of race boats and spectator yachts venturing down the main channel of our harbor.

One of my fondest memories was seeing the Duke, John Wayne, standing on his pier with a big smile waving to the racers as they went by his home.

It would behoove our city and businesses for international stature to return this exciting event for our residents and spectators. Whether it be Broadcom, Pimco or other international yet local businesses, I’m sure a local charity could be benefited through this endeavor.

The boat show also had many other yachts I found noteworthy. The classic wood Trumpy from the 1950s, “Aurora V,” which I wrote about previously, was there for sale. We inspected a 56-foot catamaran sailboat that could circumnavigate the globe in comfort.

Ardell Yacht brokers had an 87-foot Johnson motor yacht that was very impressive. The fit and finish was excellent and seemed much larger than its size. It had a 25-foot beam and master stateroom on the main deck. Normally only 120-foot plus yachts feature this design style. The granite hallway and heads (bathrooms), and high gloss varnished bulkheads (walls), gave this yacht the “wow” factor. For three million dollars this was quite a yacht.

The bargain of the show? For less than half the normal price for a yacht this size and condition, “Shogun” was the queen of the show. This 120-foot aluminum motor yacht not only had the volume of a 150-foot yacht, it had the cruising fuel burn of a 70-foot yacht. The 50-gallon-an-hour consumption was extremely efficient. For four million dollars, one could obtain this bargain and if you “did the deal” last weekend they would throw in a 60-foot Ocean sport fisher to fatten the deal. What a bargain!

Talk around the docks among the brokers was not only that the crowd was impressive on Friday, but experienced show brokers noted that they never recalled a Thursday where the docks were full of so many onlookers. Hopefully this bodes well for our local economy. We could use the boost!

Friday the parks and street above Big Corona State Beach will be full of spectators to view the start of the Ensenada Sailboat Race. Saw a cute decal about the beach fire rings, “Keep Your Mitts Off Our Pitts.”