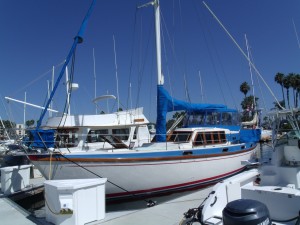 I’ve written in the past about Dick Valdes and his impressive Orange County career of creating at least three boat manufacturing companies.

Columbia sailboats was the first that I recall, followed by Lancer which created sailing yachts, and two motorsailers which impressed me. The 44 and 65-foot which had twin engines and were quite roomy down below. The third company was Mediterranean sport fishers which were 38-foot and 54-foot.

The reason I mention this is I shot a picture of a 45-foot Columbia motorsailer I’ve been working on in Redondo Harbor. About eight years ago the owner, Chris, started restoring this yacht. This vessel is probably more pristine than when it was new in 1972. The cockpit and stern have a custom stainless steel bimini frame which also has the appropriate wenches mounted for easy reach and operation. The stern has stainless steel railing with padded seats in the corners. The windows have varnished teak frames which stand out and are quite yachty.

When we opened the varnished teak and holly engine room hatch the gloss white bilge area was hospital clean and the fire engine gloss red engine was also clean and spotless. The care and Bristol condition of this yacht, especially more than 40 years old, was a marvel.

I received the results of the Hatteras/Cabo/Viking Fishing Tournament, home based at Newport Harbor’s Basin Marine Shipyard. Many times in the past not all species were landed as they include Marlin, Yellowtail, Tuna and Dorado. Not this year!

Six year old Josh Brain was the youngest fisherman on the 54-foot Hatteras, Brainwave, with a whopping 24-pound Dorado for first place. First place Marlin release was, Reel Time, with Dave King and Chris Haug. The largest Yellow Tail was caught on Dialed Inn, and weighed almost 17-pounds. A 21-pound Tuna landed, 38 Special, first place in that category. This tournament is always enjoyable due to the hospitality of Dave and Derek New.

Next Friday morning, September 12, the tall ship Pilgrim of Newport will return to our harbor and berth at Newport Seabase, 1931 West Coast Hwy, on Friday and Saturday for a celebration of builder Dennis Holland. Boaters are encouraged to meet outside the jetty at 11 a.m. to accompany the tall ship to the berth with the Harbor Patrol fireboat, water cannon shooting, as the lead boat. Three of Dennis’ antique cars will be on display, and marine artists Scott Kennedy and Gary Miltimore will showcase their work. This kid friendly event will include the “No Quarter Given Pirate Brigade.”

Artifacts of the Pilgrim will be on display and the Coast Guard and Harbor Patrol vessels will be available for boarding. Food and drinks will be offered.

Please set aside some time and bring the family for this great event.