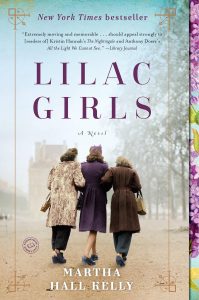 Recently, I took a fifteen-hour road trip with my oldest son, ferrying him home from school for the measly three week break that will act as his “summer.”

After flying in to help him move out of the dorm, and into his new digs, we made the trek back to California via the open road, so that he would have a car at his disposal while home.

Of course, I stocked up on books for the trip, anticipating a lot of reading time during our journey, but we were busier than I expected, and I wasn’t able to read all that much.

So it is, that one of my “road books” has now become the Under Cover Book Club selection for June: “Lilac Girls,” by Martha Hall Kelly.

I have discovered in recent years that my most favorite genre is likely historical fiction, particularly when there are actual people whose individual stories have been intertwined with the overall story.

I find it both lends authenticity to the tale, and brings to life a moment in history that, as readers, we may have been unfamiliar with. Additionally, I find it fascinating when these books are narrated by more than one individual, weaving numerous stories together into a literary tapestry.

“Lilac Girls” definitely fills the bill on all of these counts. It is the story of three women, each with a very different story, whose narratives cross paths through the horror of the all-female Nazi “reeducation camp,” Ravensbrück.

Caroline Ferriday was a New York socialite who was working at the French Consulate as Hitler’s reign of terror unfolded in Europe. Kasia Kuzmeric was a Polish teenager who joined the resistance, doing all she could to thwart the Nazi’s plans. Herta Oberheuser was a young doctor, chafing in a male dominated world, who accepted a government medical position within the Reich, where she quickly had to begin justifying to herself the acceptability of her actions.

It may seem that these three stories are far removed, but they all come together due to the infamous Ravensbrück. Known for conducting appalling medical “experiments” on live patients, the camp became home to both Herta, as a doctor, and Kasia as a prisoner. Caroline’s story meshes a little later, when after the war, she became an advocate for the group of women, known as the Rabbits, who were the victims of the experiments.

This story was one that was a long time in the telling. Ferriday was a real woman who had a second home in Connecticut. Kelly first became aware of her, via an article published in 1999 in Victoria magazine, about the estate’s lilac garden. A lover of lilacs, Kelly cut out the article and kept it in her wallet for years, until she was able to visit the garden herself, at the Bellamy-Ferriday house.

While touring the grounds, Kelly was struck by a photo of the Rabbits displayed there, and when she asked to learn more, the guide explained to her that Ferriday had been a staunch supporter of the women, ensuring that they received medical care to help with their injuries, and that the world would know of their struggle.

Upon visiting the gift shop on her way out, Kelly looked for a book about Ferriday, and discovered that there were none. So, instead she bought a lilac clipping, took it home to plant, and set out to write a book of her own.

A journalist, Kelly impeccably researched both Ferriday’s life, and the plight of the women at Ravensbrück. The book took a full decade to write, as that lilac clipping grew into a bush. Now, finally, Caroline Ferriday’s story is being told.

After receiving rave reviews for the book, Kelly began to write two prequels, both currently in the works, about Ferriday’s ancestors – strong women in their own right — who left their mark, respectively, in the WWI and Civil War eras.

Something tells me that all of her books will fall into my lap, each as compelling as the next, but for now, I plan to pay my respects to the women for whom life was forever altered by a place called Ravensbrück.