About 150 people from 25 different churches throughout Southern California chose to spend 9/11 at a dynamic one-day seminar called “Bridges,” where they learned how to reshape the way they view and respond to their Muslim neighbors.  Taught by Crescent Project founder Fouad Masri, the event was held at Mariners Church.

Fouad, an author and lecturer, was born and raised in the war zone of Beirut, Lebanon.  As a third-generation pastor, he has a driving passion for sharing the love of Christ with Muslims and is excited to educate and equip Christians to do the same.

“Our job is not to make the Muslim a Christian,” Fouad said. “Our job is to show them the love of Christ.”

Fouad has a bachelor’s degree in mass communications and an M.A. from Fuller Theological Seminary in Islamic studies.  He is an ordained minister and has been ministering to Muslims since 1979.

In 1993, he founded Arab International Ministry, now Crescent Project (crescentproject.org), to nurture transformational relationships between Christians and Muslims and overcome misconceptions about Islam and Christianity.  The Indianapolis-based ministry trains Christians how to discuss their faith in Jesus Christ with Muslims in ways that are respectful of both religions.  The Crescent Project offers seminars, retreats and other educational materials.

“This event came about because many people in our church have a passion for the Muslim world,” said Christian Mungai, Mariners Pastor of Community Development.  “We’d been thinking about a ministry geared to Muslims since we have so many in Southern California, but we haven’t had a way to bridge the gap between us.  I really love it when the Church stops being just a safe place where people are comfortable and we get concerned about the issues of the world.  (We’re known too much for what we are against and not enough for what we are for, and we are pro-love and pro-getting along.).  We need to demystify Islam and learn how to engage in conversation with Muslims.  Crescent Project approached us, the time was right and all the pieces came together.  It’s a concerted effort and I am absolutely excited!”

Abigail Davis, Southwestern Regional Director of Crescent Project, explained how the event came to be held on Sept. 11.

“It was really just a function of our calendar, we had a choice of Labor Day week-end or 9/11,” she said.  “Then we thought maybe the significance of the day would draw people to learn more about Islam.  We’re actually glad it worked out that way, especially in light of what’s going on in Florida. We want to reach out in love, not promote violence or hate.  Qur’an burning is not how we should respond.”

“Too many people fear Muslims because they look or dress differently than we do, and unfortunately we mostly hear about radical extremists and terrorists.” Abigail said.   “We help people view Muslims as God does and to love them.”

Abigail explained that 20% of Muslims that live in the United States live in California and that this was Crescent Project’s first event in Southern California.

Fouad explained that 7 million Muslims live in North America and they are searching for true peace.

“More than any other time in history, Muslims are open to hearing about and following Jesus.” He said.  “In the past 20 years, more Muslims have become Christians than in the previous 1,400 years combined!”

“Our goal is to overcome misunderstandings about Islam through education so that Christians take the initiative to build friendships with their Muslim neighbors.” Fouad said. “Friendships open the door for discussion about spiritual issues and personal beliefs.”

Fouad said many Muslims have distorted views of Christians, just as Christians do of Muslims.

He explained that when Christians invite Muslim neighbors over for a meal the common response is: “We’ve lived here for years and you are the first Christian to invite us over.”  Fouad encouraged bridge building, which comes from following Jesus’ example of being loving, respectful and compassionate.  He inspired the audience to build friendships with Muslims, to listen to them, to share life stories, not to argue or criticize.  Communication lessens fear and increases trust.

“9/11 shows us there are people in the world who are hateful, but the message of Jesus is to love our neighbors, so let’s love our neighbors.  ” Fouad said.  “It’s great to see Christians using this day to build bridges, and not walls. 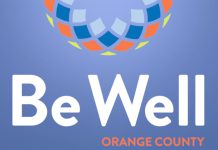