More than 400 guests were there to support CASA’s mission of serving abused, abandoned, and neglected children in Orange County with a trained and supported volunteer advocate.

This year’s Gala netted more than $1.3 million. It’ the fifth year in a row that CASA has exceeded in breaking the previous year’s net, thereby becoming the organization’s highest netting fundraiser in their 34 year history.

Guests arrived to a cocktail reception featuring a silent auction with more than 100 items up for bid, including 16 “Chef Table” experiences. 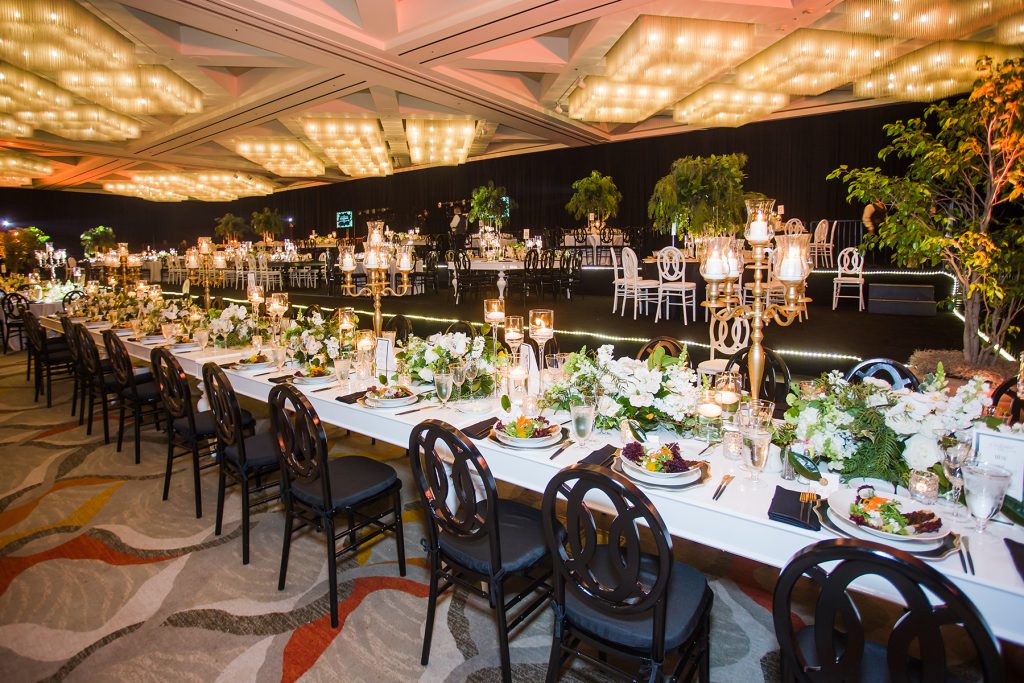 After the reception, guests strolled in to a ballroom transformed into a dazzling and elegant setting dramatically decorated with black and white chairs, white table settings and white roses along with greenery and even small trees.

USC Quarterback, and CASA-OC supporter, served as this year’s Masters of Ceremonies and helped to provide a lighthearted balance for the evening’s program. Regan Phillips, CASA CEO, noted the critical importance of CASA’s work for youth in the foster care system, stating that “one in eight American children has suffered a confirmed case of neglect or abuse by age 18…there are more than 400,000 children in the foster care in the United States, over 70,000 of which are in California.”

According to Phillips, the total economic impact incurred by the California community for the lifetime costs associated with 71,289 substantiated victims of child maltreatment in 2017 was $19.31 billion.

Chairman of CASA’s Governing Board of Directors, Ted Nark, presented the Tarsadia Foundation of Newport Beach with the award for Foundation of the Year. The award was accepted by the family foundation’s patriarch, B.U. Patel.

Michael Wong, Strategic Planning Chair on CASA’s Board of Directors, presented Twila True Fine Jewelry and Watches of Newport Beach with the award for Outstanding Corporation. Upon accepting the award, Twila True noted that the CASA advocates “do fantastic work, not for personal gain but because they think it’s the right thing to do. I have been involved with CASA for a long time, and I’m proud of what CASA does.”

Mark Kerslake, Vice Chair on CASA’s Governing Board of Directors, presented Jeff and Jenny Gross on behalf of The William, Jeff and Jennifer Gross Family Foundation in Laguna Beach with the award for this year’s Children’s Champions for their commitment and support of CASA’s organization and mission (Jenny Gross is a current member of CASA’s Governing Board of Directors).

Auctioneer, Zack Krone and Mark Sanchez got the attendees excited enough to pledge over $670,000 with donations from the guests ranging from $100,000 to $500.

at the Villa Verai in Phuket, Thailand, donated by Twila True, which fetched a $37,500 donation. One lucky $15,000 bidder was able to choose from one of four jewelry pieces offered by Twila True, a Diamond Sponsor and exclusive Jewelry Sponsor for this year’s gala.

Following the live auction guests headed to the dance floor to continue the party and celebrate the evening’s success with a concert performance by The Side Deal, a Newport Beach-based band comprised of members of Sugar Ray and Train.

About Court Appointed Special Advocates: CASA is a privately-funded non-profit organization that serves severely abused, neglected and abandoned children through the recruitment, training and continued support of volunteers who advocate and mentor these children, representing their best interest in the courtroom and other settings.