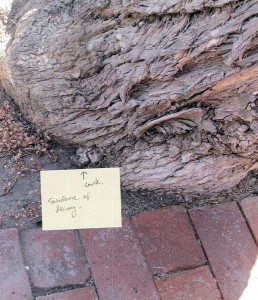 A city commission approved the removal of several trees Tuesday

The four trees were found to have “severe decay” and were a potential liability, according to the staff report. They need to be removed “to ensure public safety and prevent property damage,” it notes.

Only four were up for the commission’s review because, as desert gum trees, they have been designated “special” by the city’s general plan and therefore need the approval of the commission before being cut down. The six other trees are not designated as special and will be removed according to city process, Sereno said.

The special city trees slated for the chopping block are located at 500, 712 and 730 Poppy Avenue and 535 Hazel Drive (tree is located on Poppy Avenue).

Staff will likely recommend the Australian willow or the “Little Gem” magnolia for replacement, Sereno said.

“The residents are really pleased with those (magnolia trees),” Sereno said.

The street tree designation list is also up for review, as Sereno mentioned to the commissioners on Tuesday, and needs to be approved before anything new is planted.

Commissioners will likely consider the proposed list at the next PBR meeting.

“It would open it up to more than just the magnolia and the Australian willow,” he said. “It will give residents an opportunity to choose of the list.”

“The desert gum is not a great tree, especially for parkways,” Sereno noted.

Coral gum trees, previously approved street trees, are also inappropriate for the area and have also been removed from the staff’s proposed list.

Sereno also spoke about the rating system used by the consultant to determine whether a tree should be removed or not.

There are three ratings that add up to 12: Probability of failure, size of the defective part, and the target rate, Sereno explained.

The probability of failure is based on the tree species itself, Sereno noted. The size of the defective part is very subjective and is on a three point scale. The target rate is based on how often the surrounding area is used.

“Tree risk assessment is a systematic approach to evaluating a tree’s health and estimating the risk of tree failure,” Jensen explained in a letter to staff.

On the one to 12 rating system (12 being the worst), many of the trees are rated eight or nine, Jensen wrote.

“There is no way to ensure the safety of any of the 17 desert gum trees to be retained,” Jensen wrote. They should be monitored and/or have further testing performed for root rot, he added.

Several need to be inspected on a regular basis, he recommended. Check for root rot, insect damage or a general weak appearance, he said.

Longtime opponent to most tree removals in the city, Englebrecht said he’s against the “knee jerk reaction” that the city and council have had to “the great tree cut down.”

“We have removed hundreds and hundreds of trees worth millions of dollars in our community because a company said, not definitively, that there is potential for liability,” Englebrecht said.

It was a rush to judgment to quickly chop down a tree if there were any signs of decay, he added. He suggesting monitoring the trees instead.

The commission has the power to keep the city beautiful and not become a “wasteland,” Englebrecht said.

Commissioner Tom Anderson said he shares Englebrecht’s passion for keeping the city beautiful, and questioned why trees that “to the untrained eye look healthy” are recommended for removal. There are other trees, Anderson said, that look so bad he is surprised they haven’t been removed earlier. A tree with a cracked trunk, he gave as an example, is a “no brainer” and should be removed.

Resident Justin Cox also commented about the importance of beautifying the city, using native plants and protecting the habitat.

Hazel Street resident Carolyn Rust, who lives at one of the addresses with a special tree recommended for removal also spoke during public comment.

“If you could give me some nice magnolia trees to replace this ugly thing I have here, I would love you all,” Rust said.

The desert gum in front of her home was chopped off at some point in time and now it blows wildly in the wind and gets caught up in the wires, she noted.

“When we put in these lovely trees, I’d like you all to look up at the hideous utility wires that are everywhere in Corona del Mar,” she said. “The trees have been hacked and butchered because of the utility wires.”

She hoped the city would at some point investigate putting the wires underground.

Also during the meeting, commissioners changed seats. Ron Cole was elected as chairman and Englebrecht moved into the vice chairman seat.

Commissioners also honored Corona del Mar resident Karen Tringali with a Community Service Award. Tringali is president of the CdM Residents Association, board member for Newport Beach Community Emergency Response Team and an active volunteer in the city. CERT leader, Matt Brisbois, and two CERT volunteers were all on hand to support Tringali.

The meeting adjourned with a few moments of silence in memory of Ben Carlson, the lifeguard who died while rescuing a swimmer in July.