It’s always news when a new chef comes to town, but this week two new chefs have taken over the kitchens at a pair of well-known waterfront restaurants: Bluewater Grill and Back Bay Bistro.

We were stunned and saddened earlier this year when Brian Hirsty, Bluewater Grill’s beloved founding executive chef, passed away in March after battling a rare bone marrow disease. He helped open the first Bluewater Grill in Newport Beach’s Cannery Village in 1996, and went on to open other Bluewater Grill restaurant locations.

We always enjoyed talking to Hirsty, whether in the restaurant or at one of the many special events he attended to ladle out his signature clam chowder and other seafood concoctions.

“We are beyond grateful to Brian for creating Bluewater Grill’s rich culinary tradition and commitment to menu excellence, hospitality and introducing the joy of seafood to tens of thousands of first-time customers,”

said Jimmy Ulcickas. Bluewater Grill co-founder. “His spirit most definitely lives on – not only in the recipes and specialty dishes we serve every day, but in the many chefs like Jason that trained under him. I do believe that Brian would wholeheartedly approve of Jason taking the helm in the Bluewater kitchen.”

Mazur managed the kitchen at Bluewater Grill’s Redondo Beach location, and will be responsible for expanding the culinary program at all six Bluewater restaurants and a seventh location opening this fall in Temecula.

“I am honored to continue what Chef Brian started,” said Mazur. “My goal is nothing short of making Bluewater Grill the most innovative sustainable seafood restaurant in America. Our goal at Bluewater is to show just how delicious and culinary-focused seafood sustainability can be.”

Mazur has worked for a variety of noted local restaurants including Neiman-Marcus in Newport Beach, Original Fish Co., in Los Alamitos, McCormick & Schmidt’s in Anaheim, French 75 in Irvine, Aubergine, Troquet, Morry’s of Naples and Le Quai.

For more info, go to bluewatergrill.com.

In addition to overseeing the 199-seat restaurant, he will be responsible for the Dunes’ catering division.

“We are delighted to welcome aboard Chef Bruno to our team and look forward to transforming the Back Bay Bistro,” said Andrew Theodorou, vice president and general manager of the Dunes. “His vast global experience, sterling reputation and enthusiasm for the task that lies ahead make him the ideal person for his new position.”

Massuger was trained at the Ecole Hoteliere in Rouen, France, and later at the Culinary Institute of America (CIA). He is a member of Masters of French Gastronomy, Les Toques Blanches, ACF member of Escoffier Society, and a touring chef for the prestigious James Beard House.

We strayed out of our normal Newport Beach culinary comfort zone to attend the opening of two local restaurants: US Taco Co. in downtown Huntington Beach, and La Vida Cantina in The Triangle in Costa Mesa. Both offer novel cuisine in novel settings.

“Fast casual is growing quickly, so we looked at consumer segment break downs and came up with an idea,” he said. “There is a proliferation of the foodie—this is the golden age of food exploration. People’s expectations have changed, so we went around the country and looked at Texas brisket, Maine lobster roles, and had an idea to do the best of America in tacos. Tacos, fries and shakes. Classic American dishes, done with a twist, a remix, with Mexican flavors and spices.”

“The menu started with our travels,” said Executive Chef, Rene Pisciotti. “We knew we had to get the best of America in a taco. We narrowed it down and now we have 10 tacos that best represent America. It’s Americana served in a taco, with surprising Mexican and Latin elements that make it fun and interesting.”

The papas fritas are cut big with bold flavors and sauces for dipping, while the trio of shakes on the menu are so good you might order two.

The restaurant itself is a blend of surf city and Day of the Dead, and fits perfectly with the downtown HB atmosphere.

La Vida Cantina replaced El Corazon Restaurant and has only been open for a couple of weeks but is already garnering rave reviews for its new outdoor bar and patio, and authentic menu. 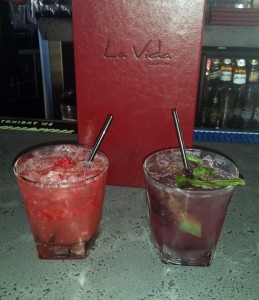