In response to a young boy recently being hit and killed while riding his bike near his school, Newport  Heights Elementary, city officials moved forward this week with an effort to improve bike safety around schools and other key areas.

Newport Beach City Council unanimously approved an item Tuesday that directed staff to examine ideas about better bicycle safety, seek input from the community, police, and school district, and report back to the council on how to enhance and improve ways to get to and from schools and other key areas frequented by children on bikes.

“I am encouraged to do this,” said Councilman Tony Petros, a cyclist himself and an advocate for bike safety. “I will do everything I can to advance initiatives as we move forward.”

The item asks the city to take some more time and, as part of a new effort, look at safe routes to and from school, with an initial focus on the Newport Heights area.

“This matter is very important to all of us in the community,” said Mayor Diane Dixon.

Brock McCann, 8, a third grader from Newport Heights Elementary School was riding his bicycle home from school around 1:26 p.m. on May 25 when he was hit by a CR&R trash truck near the corner of 15th Street and Michael Place, just west of Irvine Avenue.

On behalf of all the children at Newport Heights, she encouraged the city to look into the issue.

“Given the recent and heartbreaking death of Newport Heights Elementary School student Brock McCann, members of the community (as well as the City Council) have asked the city to take a fresh look at ways bicycle safety may be improved at and around schools (and other key locations),” the staff report reads.

The number one item in the Bicycle Master Plan is safety, Petros said.

“And, yet, this happened,” Petros said. 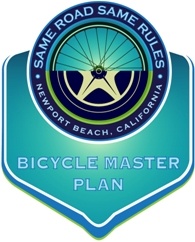 Petros, along with City Manager Dave Kiff and Public Works Department Director Dave Webb, have already identified several areas that they can start to examine.

They’ll start in the Newport Heights neighborhood, then study move on to the neighborhoods surrounding schools in the rest of the city and other key areas.

The Bicycle Master Plan has done many great things throughout the city, but certainly not enough in the Heights, said one public speaker, a father of three and Newport Heights resident.

“It’s complete mayhem at times and there is truly nowhere to ride your bike at all,” he said.

Not many kids ride bikes, which is kind of sad, he commented, in a tight knit neighborhood where kids should have that opportunity to do it safely to ride to school, if they’re the appropriate age. Many of his neighbors who live only a few blocks from school choose not to walk or ride bikes to the school, he said.

Some changes in the Heights would really help the neighborhood.

“I encourage you guys to do it and do it now,” he said. “Make some significant changes.”

Kiff said he would love to get some things going before the school year starts again.

“We’ll get to work right away,” Kiff said.

The effort would study, suggest, propose funding for, and guide the implementation of innovative and community-supported safety improvements around schools. A later review might look at accessways to key parks (such as Sunset Ridge), and to the Newport Beach Junior Lifeguard Program at the Balboa Pier.

Petros commended the McCann family for attending the meeting.

“(And) for being the type of people that you are,” Petros said as he got emotional.

When a tragedy like this happens, they need to take pause and look at ways to avoid this again, Petros said.

They adjourned the meeting in memory of Brock McCann.

“I didn’t know him and I wished I did,” Petros said.

Petros described the young boy, as the McCann family had told him.

He played the piano, the bongo drums, and football, and loved to draw. He was a beloved son, brother, friend, and classmate.

“He was a happy soul, a carefree soul, and a silly soul; and he was only 8 years old,” Petros said, as he got emotional again. “Today, more than ever, the world needs more Brock McCanns. He’s not here with us though and that’s heaven’s gain, but it’s our monumental loss.”