The City of Newport Beach has decided to remove dozens of blue gum eucalyptus trees from a highly traveled bike and pedestrian trail near the Castaways Park early next year. The trail runs from the cliffs above Upper Newport Back Bay to Dover Drive and Westcliff Avenue.

The safety of Newport’s blue gum eucalyptus trees has been the subject of intense city and widespread media attention since the death of Haeyoon Miller, 29, of Tustin, who was killed when a massive blue gum eucalyptus tree fell and crushed her to death while she was sitting in car her waiting to make a left hand turn from Irvine Avenue onto Westcliff Drive in September of 2011.

In the wake of Miller’s death, the city launched a widespread emergency inspection program and hired an outside tree expert. In addition, the city’s own internal tree experts were tasked with addressing the safety of all blue gum eucalyptus trees citywide.

Shortly after Miller’s death, the city removed more than 100 blue gum trees from Irvine Avenue, citing safety concerns from its own internal city tree experts and the outside tree safety expert hired by the city. Later the city removed swaths of blue gum trees in areas throughout the city, from Holiday Road near Dover Shores to additional trees in Corona Del Mar. Other trees were removed from in front of City Manager Dave Kiff’s former home on 23rd Street.

As first reported by The Independent in October of 2011, the trail trees near the Castaways area have remained untouched, despite the city’s own outside tree expert calling for the immediate removal of many of trees back in 2011 due to their danger to public safety.

Earlier this month the city decided to take action to remove about half of the trees that line the trial. The reason, according to the city’s own tree experts and a staff report presented to the Park’s. Beaches and Recreation Commission on Dec 4, is “severe root decay and potential liability.”

When asked about the city’s decision to remove the trees, City spokesperson Tara Finnegan told the Independent, “The commission unanimously approved staff’s recommendation to remove 54 blue gum eucalyptus trees from Groves Bike Trail. There are currently 104 trees at that location.” Finnegan said the removals would probably take place in February, 2013.

According to the city’s own staff report, Newport Beach’s “urban forester” John Conway and a supervisor inspected the trees on October 15 and found 54 of the trees in need of removal. City Manager Dave Kiff and others in the city’s tree removal decision making process gave their stamp of approval to the removal recommendation.

The official go-ahead to cut the trees down was approved by the City’s Parks Commission on Dec 4. That decision is final and will not require the approval of the Newport Beach City Council, unless someone files an appeal to the Parks, Beaches and Recreation Commission’s determination.

Council member Rush Hill was notified of the issue, as were community associations, according to the staff report reviewed by the Independent. 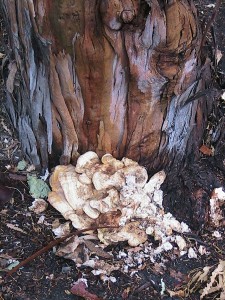 The Independent sought answers about why the city’s own outside expert report from the fall of 2011, first completed and reviewed well over a year ago — a report that specifically identified and recommended the immediate removal of dangerous trees – was not presented to the commission this time around.

In response to that question, city spokeswoman Finnegan provided this answer on behalf of Mark Harmon, the city’s General Services Director:

“Mark explained that our staff arborists also examined the BGE’s [blue gum eucalyptus]  on Groves Trail and agreed with the consulting arborist’s determination on what trees should be removed.  But, in terms of timeframe, the Groves Trail BGE’s are different than those planted in the other areas in that – they have a larger growth space surrounding them (unlike the “windrow” type planting within a median with curb & gutter that was found in other areas), they were not located on a busy street, and only some of these trees were identified for removal. About half. Those ID’d for removal needed to be removed, but not immediately. Thus, the City arborists determined that the Groves Trail / Castaway removals could be the final phase…Since about half of the BGE’s will remain there, our staff also needed to find suitable replacements for the trees that are removed.  Again, this is unlike the situation created when all of the trees along Irvine were removed and the entire median needed to be replanted.”

As to whether or not the city’s Parks Beaches and Recreation Commissioners were even made aware of the October 2011 outside expert report that called for the immediate removal of trees due to the extreme danger to the public, that answer remains unknown.

The city staff report utilized at the December 4 meeting and approved by the PB&R commission makes no mention of the earlier 2011 report.

Questions and calls about that specific issue were unanswered.