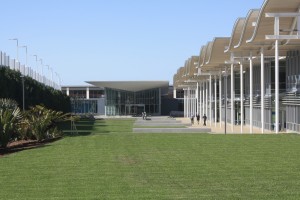 The contingency fund increased from $1.6 to $6.5 million, according to the staff report. Council also approved increasing the contract with Bohlin Cywinski Jackson by $579,670, and increase the project budget to allow for extended general conditions by approximately $1.4 million.

The actions closed out the accounting for the project.

This will be the end of appropriations toward the Civic Center project, he continued, and “cleans up all the accounting” for it.

This is still in line with the initial estimate of a $140 million budget, Badum said. The city had most recently estimated the total project cost at $131.4 million.

The contingency fund is being increased for various changes made during construction.

The $6.5 million is about six percent of the construction budget, which is typical for construction projects this complex, Badum explained. The previous amount was about one and a half percent, which Badum called “optimistic.” It was originally set for about $2.6 million, or about two and a half percent, but adding the San Miguel Pedestrian Bridge reduced it to $1.6 million.

“I think probably the biggest mistake, if any, that we made is that we cut that original contingency too low,” said councilman Ed Selich. “We’ve come in under, or within, industry norms… At the end of the day, for the $140 million I’m convinced we got good value for our money.”

Change orders are very typical in every capital improvement projects that the city does, he said. Most of the public works project range between five and 10 percent in contingencies, he continued, so in this case a six percent contingency is average.

“We’re still working hard, very hard, to negotiate down these change orders to maybe even see if we can get that a little lower,” Badum said.

The changes made were due to design omissions or gaps in the plan, building code issues, city requirements, design enhancements, and unforeseen conditions, Badum said. About 750 changes, most of them under $10,000, according to Badum.

The design omissions make up for about 66 percent of all the changes.

This category usually “gives most people the most heartburn,” Badum said, which consists of a lot of the little “niggly” details that happen during construction.

“We always say in the business, ‘There’s no such thing as a perfect set of plans,’” Badum said.

Part of the reason this happened on this particular project, Badum explained, is because the city was trying hard to push this project out the door quickly when they went requested bids, to take advantage of the lower costs offered by contractors during that time, when the economy was still in a recession.

“So it was a really great time for us to bid this project out, get really good prices for materials and labor,” he said. “Now, the downside of that was we pushed the plans out the door probably a little less complete than we would have liked.”

Councilman Mike Henn noted that  because the city hurried things along the project cost more.

Looking at it from a broad perspective, Selich added after the presentation, the city set out with plans that were about 90 percent complete in order to take advantage of an extremely favorable construction environment to be able to save money while knowing that some of these items were probably going to take place.

City staff hope to negotiate this amount as well, Badum said. He feels optimistic they’ll be able to lower that amount.

They’ll be out by the end of this month, he added.

The third section on the approved item is to expand the construction support costs and increase the architect fee by $579,670. The architect‘s contract ended at the end of the year and their work has been extended, using this time period “to verify the compliance of the plans and the conditions and quality of the work,” Badum explained.

They have been working at a reduced rate by 50 percent.

Several members of the public spoke, many questioning the design omissions, general conditions and construction support.

Councilwoman Nancy Gardner urged staff to continue to negotiate in an effort to lower the cost.

Henn agreed with Gardner about continuing to work on negotiations and commented on the responsibilities of the architect.

“I still can’t help but to think that the architect has some culpability here and so as you’re going back to talk about this, it’s pretty clear to me the architect should not get a clear pass on those negotiations, and those hard negotiations,” Henn said. “Especially in light of the fact that we’re awarding another half a million dollars to them. Some of which, I still can’t escape the feeling, might have had to do with some of their errors to start with.”