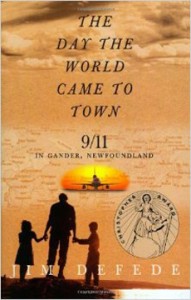 This week, we mark the thirteenth anniversary of the terrible events of September 11, 2001. Like everyone in America, and probably the world, I have a visceral, almost physical memory of where I was when I heard the news.

Expecting our second child, I was a month away from my due date, and was feeling especially exhausted. I brought our almost four-year-old into bed with me, as my husband got ready for work, to try and steal an extra hour or two of rest before facing the day.

On his way out the door, my husband caught a moment of the morning news, and called up the stairs, “You should turn on the news, it sounds like a plane hit the World Trade Center.”

Confused, I asked, “What do you mean — an accident?”

Rushing out the door, he had no idea what was unfolding. As I turned on the TV, just in time to see the second plane hit, I, along with the nation, was dumbfounded.

Over the next hours and days, we would follow a cycle of Disney Channel – with no news – during the hours our son was up, and a ravenous consumption of news as soon as he wasn’t, desperate for word of survivors, and aching at the senseless tragedy.

Loss hit close to home, as a boy in our son’s pre-school class lost his grandparents, passengers on one of the hijacked planes. And, although the whole of our nation was in mourning, we began to notice also, a resurgence of hope.

A country usually divided by politics, religion, and cynicism stood together. Patriotism surged, flags were flown, and while we remained sad, there was also an overwhelming feeling of unity. From an act depicting the very worst mankind was capable of, we were able to see the best of humanity as well.

Americans were not alone in their displays of support and generosity. Our global neighbors all stood up to help salve our collective wounds. One tiny town in a remote area of Canada, however, showed the world what it really means to be a good neighbor.

The sleepy town of Gander, Newfoundland was, in the days before jet planes, an essential aviation hub. At one time, nearly every transatlantic flight needed to stop in Gander, in order to refuel and carry on to their final destination. With the advent of larger planes able to hold more fuel, however, the town’s airfield had become largely obsolete.

As U.S. airspace closed following the attacks, some 255 aircraft were diverted to a new destination in Canada. For 38 of those planes and their combined 6,595 passengers, Gander became anything but obsolete.

“The Day the World Came to Town: 9/11 in Gander, Newfoundland,” tells the story of the incredible townspeople, and the unmistakable mark their kindness left on those displaced by tragedy.

Impeccably researched and written by Miami-based investigative journalist, Jim DeFede, the book was a lovely gift from my mother-in-law that provided an even lovelier read.

In what is, I’m sure, one of the few truly uplifting volumes about 9/11, we meet the ordinary folks, who on a moments notice transformed their town into a giant shelter to welcome the “plane people.”

Ganderites offered their cars, food, showers, and beds to the strangers who would soon become honorary “Newfies.”

The town pharmacist worked for thirty hours straight to fill all the necessary prescriptions free of charge, and the sheriff, after speaking to a worried family member via telephone, drove from site to site in search of the woman’s sister, to whom he promised to deliver a hug.

Those displaced in Gander included a family returning from Kazakhstan with their newly adopted daughter, the head of the Rockefeller Foundation, and a couple who, sick with worry, found comfort in the arms of new friends as they awaited news of their son, an NYFD firefighter who perished in the rescue attempt.

By opening their town and their hearts, and becoming exemplars of how humankind should be, the citizens of Gander helped 6,595 scared and grieving souls begin to heal. In the process, they gave the rest of us a new emotion to associate with an awful day: gratitude.