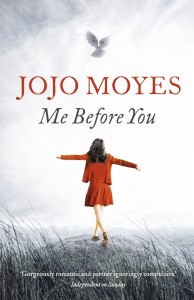 Thanks to the month of July literally coming in with a bang and a shower of sparks, Under Cover Book Club is a little late on the uptake with this month’s selection.

Add in the fact that it is summertime, after all, and there are still a few of us fortunate enough to spend lazy days in the sunshine, and I figured that a beach read was in order.

There’s only one problem: while I enjoy books across just about every genre, I can, at times, be a little bit of a book snob. Choosing a fluffy beach read is not really my forte, for the same reason I don’t tend to frequent chick flicks – I’m always worried they’ll be, well, totally lame.

I used to have a rule that I never quit on a book. This rule served me well, as there have been many over the years that I ended up really enjoying, even though they didn’t wow me at the outset. These days, however, my time is just too precious to waste reading a bad book, so basically, the stories have to either put up, or shut up.

Consequently, I end up shying away from escapist beach reads, because I feel they pose a higher risk of ending up in the “shut up” column. This is where it’s nice to have a friend who can give a good recommendation. Of course, like everything else, these are subjective, so you have to be able to trust the source.

In addition to being an actual librarian, (how’s that for a recommendation qualification?!) my friend Carin has been known to enjoy both intelligent literature as well as lighter selections, such as “Sweet Valley High Reunion.”

So, when she told me that I needed to pick up a copy of “Me Before You,” by Jojo Moyes, I figured I had found my next read. The fact that she followed up that statement with an offer to “get coffee and cry” once I finished the book pretty much sealed the deal.

Thanks to my handy-dandy free two-day shipping from Amazon, the book was in my hands in no time, and has officially become the book club selection for July.

Moyes, two-time winner of the Romantic Novelist’s Award, treats readers to a love story that digs a little deeper in “Me Before You,” which has been nominated for the UK Galaxy Book Awards Book of the Year.

Louisa is a simple girl, who has never had aspirations for a life outside her small village. Will is a larger than life mover and shaker who is at home in the company of beautiful women, making multi-million dollar deals, and enjoying extreme sports.

A tragic car accident brings the two together when Will is rendered a quadriplegic, and Lou is hired as his caregiver – a position slated to last for six months.

Although at the outset the two have nothing in common, Lou begins to see past Will’s sharp exterior and starts to truly care for him. When she discovers that her job’s temporary nature is due to the fact that in six months time, Will intends to go through with an assisted suicide, it becomes her mission to convince him there is still much to live for.

Tackling issues that run a littler deeper than those in your typical chick-lit romances, “Me Before You” still manages to tell a love story that is all the more real for the heartbreak that comes along with it.

My journey with the book has just begun, but so far it has me hooked. I can’t wait to enjoy a little Starbucks, seasoned in a good way with a tear or two, and peppered with great conversation once I’m done.