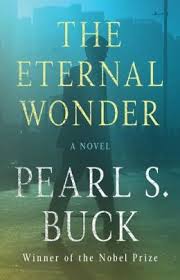 In January of this year, 40 years after her death, a photocopied, hand-written manuscript was found tucked away in a storage unit in Texas.

Believed to be the last thing she worked on before her death of cancer in 1973, that manuscript has just been released as “The Eternal Wonder,” the final novel by acclaimed Nobel laureate, Pearl S. Buck.

In a case where the book’s own story is as interesting as the one told within its pages, this manuscript has had quite the journey. Buck lived out her final days in Vermont, and with the novel being her last work, one might wonder how it ended up dusty and forgotten about in Texas.

According to Buck’s son, Edgar S. Walsh, who manages her literary estate, the book’s travels remain a mystery to the family as well. Upon her death, Buck’s estate was in disarray, causing Walsh to comment that, “after my mother died in Vermont, her personal possessions were not carefully controlled. The family didn’t have access. Various things were stolen. Somebody in Vermont ran off with this thing, and it eventually ended up in Texas.”

Thankfully, once discovered, it was returned to the family, in exchange for a small fee, and Walsh decided to have the manuscript edited and published, despite the fact that the author herself died before having been able to revise it.

The end result is, by all accounts, another example of Buck’s rich, beautiful prose, combining her personal knowledge of Asian culture, as well as themes common to her body of writing.

Described as a coming-of-age story, “The Eternal Wonder” follows Rann Colfax, a brilliant young man whose search for purpose takes him around the globe, from New York, to England, and from Paris to Korea. Along the way, he meets Stephanie Kung, a young lady who, like him, is searching. Born of an American mother, who abandoned the family, and a Chinese father, Kung is struggling to reconcile the different cultural puzzle pieces that make up who she is.

Perhaps more accurately described as a character study, the book offers readers a look at what shapes Rann’s worldview, starting from his earliest moments in the womb. Being gifted with superior intellect does not spare him from stumbling through life, and we see how his largely academic outlook affects his relationships with those around him.

Through Stephanie, Buck was able to shine a light on a topic she was passionate about her whole life – Asian and mixed-race culture. After having spent the majority of the first half of her life in China, as the daughter of Southern Presbyterian missionaries, Buck had a great affinity for the Chinese people in particular, and the Asian cultures at large. Perplexed by the common American sentiment of her time, that the peoples of Asia were in some way inferior to their Caucasian counterparts, she worked tirelessly to help eradicate that belief.

Subsequently, she founded Pearl S. Buck International, and the Opportunity Center and Orphanage to address issues faced by children in Asian countries.

Their stated purpose was to “publicize and eliminate injustices and prejudices suffered by children, who, because of their birth, are not permitted to enjoy the educational, social, economic and civil privileges normally accorded to children.”

It was this love of the Asian people, combined with her ability to vividly portray life through the written word, which ultimately made her the first American woman to ever be awarded the Nobel Prize in Literature. The award was given to her for her “rich and truly epic descriptions of peasant life in China and for her biographical masterpieces.”

Buck’s skill for making the reader truly experience the world she writes about continues to shine in this, the final chapter of her legacy, inviting those readers yet not yet familiar with her earlier writings to quickly remedy that situation.

“The Eternal Wonder” is available at Amazon.com and Barnes & Noble.