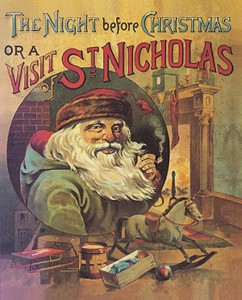 There is much to be said for tradition. What would Hanukah be without latkes and a dreidl? Or, Thanksgiving without the turkey? And, just try to find me a proper Easter that doesn’t include an egg hunt. It would be like skipping the fireworks on the Fourth of July.

Each family has their own set of non-negotiables that go hand-in-hand with the holidays.  In our family, there are several Christmas musts.

Taking a photo with Santa is mandatory, even if you are now 16 years old. Sparkling cider toasts at dinner (where everyone has to clink EVERY glass, or it doesn’t count,) staying up all night wrapping gifts while watching “A Christmas Story” for the umpteenth time, and snuggling up in new Christmas jammies, are yearly occurrences as well.

While some traditions have stood the test of time, and others have gone by the wayside (yes, we did used to carol every year as a family, passing out homemade treats), nothing has said Christmas over the years like the reading – or more precisely, reciting – of “A Visit From St. Nicholas” by Clement C. Moore.

By the time I came along, reading duties were already sitting squarely upon my father’s shoulders, but there once was a time when his father, and his grandfather before that, did the honors.

Each year, we gather around as my dad butchers, ahem, reads the poem to us. Our numbers have grown over the years to include five siblings, four spouses, and nine grandchildren, as well as assorted friends, significant others, and in-laws. We have never missed a single year.

My dad, shy man that he isn’t, revels in the spotlight, and the grandkids, now spanning the age spectrum from 4 to 20, are good sports, gathering around on the couch next 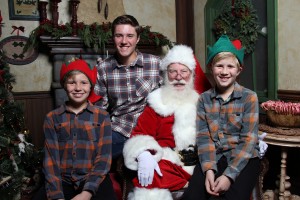 to and on top of him to allow for the customary photo op.

We quietly mouth along with him the prose we have long since committed to memory, anticipating the spots where the same words will be changed each year, their mispronunciations having themselves become a part of the tradition.

The years have seen the faces around the couch change. This Christmas will be the 17th one we have celebrated without my mother, and our very first without her mother, our recently passed, and dearly loved Nanny. We have had to share long-distance Christmas wishes with my brother and his family since their relocation to Georgia nine years ago, and divorce has caused others to leave our ranks.

But, we have welcomed new faces too:  my stepmother, Donna, has filled in as matriarch, my own mother-in-law and brother-in-law have joined us in the years since my husband’s father passed away, and this year we officially welcome the newest Anderson, my brother’s wife, Valarie.

I doubt that three generations ago, my great-grandfather could have guessed that all these years later, the little poem he read to his kids on Christmas Eve would have become such a powerful family moment.

In fact, I doubt Moore himself had any idea what his rhyming Christmas tale would become. Written nearly 200 years ago, it shaped our very notion of Santa Claus, from his mode of transportation and his attire, right down to the “round little belly, that shook when he laughed, like a bowl full of jelly.”

More importantly, it has given countless families like mine a wealth of memories, as they have gathered on couches, sat in front of fires, and snuggled on laps, listening to the story of St. Nick’s visit.

As we wrap up another holiday season, I’m grateful for a tradition that has bonded family together.

As we once again gather together on Christmas Eve, my thoughts will echo Moore’s: “Happy Christmas to all, and to all a good night!”