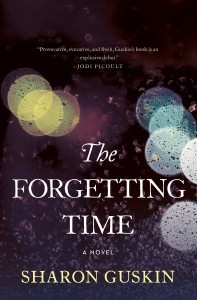 How far would you go to ease your troubled child’s suffering? If the answer came in the most unexpected of ways, would it be enough to make you reconsider everything you previously believed about life and death, and where we go when this life ends?

These are just some of the questions posed in the Under Cover Book Club selection for February, “The Forgetting Time,” by Sharon Guskin.

In her debut novel, Guskin introduces us to single mom, Janie, and her four-year-old son, Noah. Noah has long been a child with issues — he flatly refuses to take a bath, and has a definite fear of being near water. He frequently asks to go home, and questions when his “other mother” will be returning.

Janie has tried everything to find solace for a child whose nightmares are so vivid, they scare even her, but her attempts have accomplished little other than draining her bank account. When the preschool kicks Noah out due to his penchant for discussing guns and drowning, she reaches the end of her rope.

A desperate google search leads Janie to Dr. Jerome Anderson, a man fighting his own battles. A once preeminent scholar, Anderson became somewhat of a laughingstock when his research caused him to explore a path that many of his colleagues deemed unscientific. Now, facing a surprise health issue that carries a grim diagnosis, he is racing the clock to reinstate his good name, and prove the value of his work.

Together, the trio explores the possibility that Noah has lived before, and his behavior stems from memories still retained from that former life — one that did not meet a happy end. Their journey will take them to the doorstep of another woman, whose story may bring the house crashing down on everyone.

Guskin, who has previously worked as a writer and producer of documentary films, first began to explore the notions considered in her novel when she volunteered as a young woman in Thailand.

Having very different ideas on life, and afterlife than the majority of the Western world, the refugees she worked with planted the seeds of thought that would one day turn into this novel.

The ideas resurfaced again for Guskin, years later, when as a new mother she was a hospice volunteer – a unique time when she was able to experience both the beginning and end of life all at once.

The novel refers liberally to another book, “Life Before Life: Children’s Memories of Previous Lives,” by Jim Tucker, and excerpts accounts describing real-life cases of children with transferred memories. This is not, however, just a book about reincarnation. Billed as part murder mystery, part tale of a mother’s love, and part musing on the complexities of life, Guskin’s freshman effort has been met with rave reviews, and readers seem to agree that it is a spell-binding journey, regardless of whether or not you personally buy into its premise.

Fellow author Diane Chamberlain says of the book, “Sharon Guskin has written a novel that’s meticulously crafted without ever losing the heart and soul of the story. It’s both a beautiful tale of the bond between a mother and her young son as well as a gripping mystery that asks that universal human question ‘were we here before?’”

By all accounts, Guskin is an author whose name we should remember. While critics eagerly await her next offering, I plan to cozy up with this one, and attempt to solve the mystery that is a young boy named Noah.